The Christian Climate Action kit has been a useful resource on a number of occasions for the Caloundra Catholic Community Social Justice Network (CCCSJN). The group has carried out a multi-pronged approach to raising awareness on climate change over the last two years after deciding to make climate change a priority. They did so because of the urgency of the issue and its devastating impact upon creation and people, especially the world’s poorest people - those who have done the least to cause climate change and are the least able to respond. 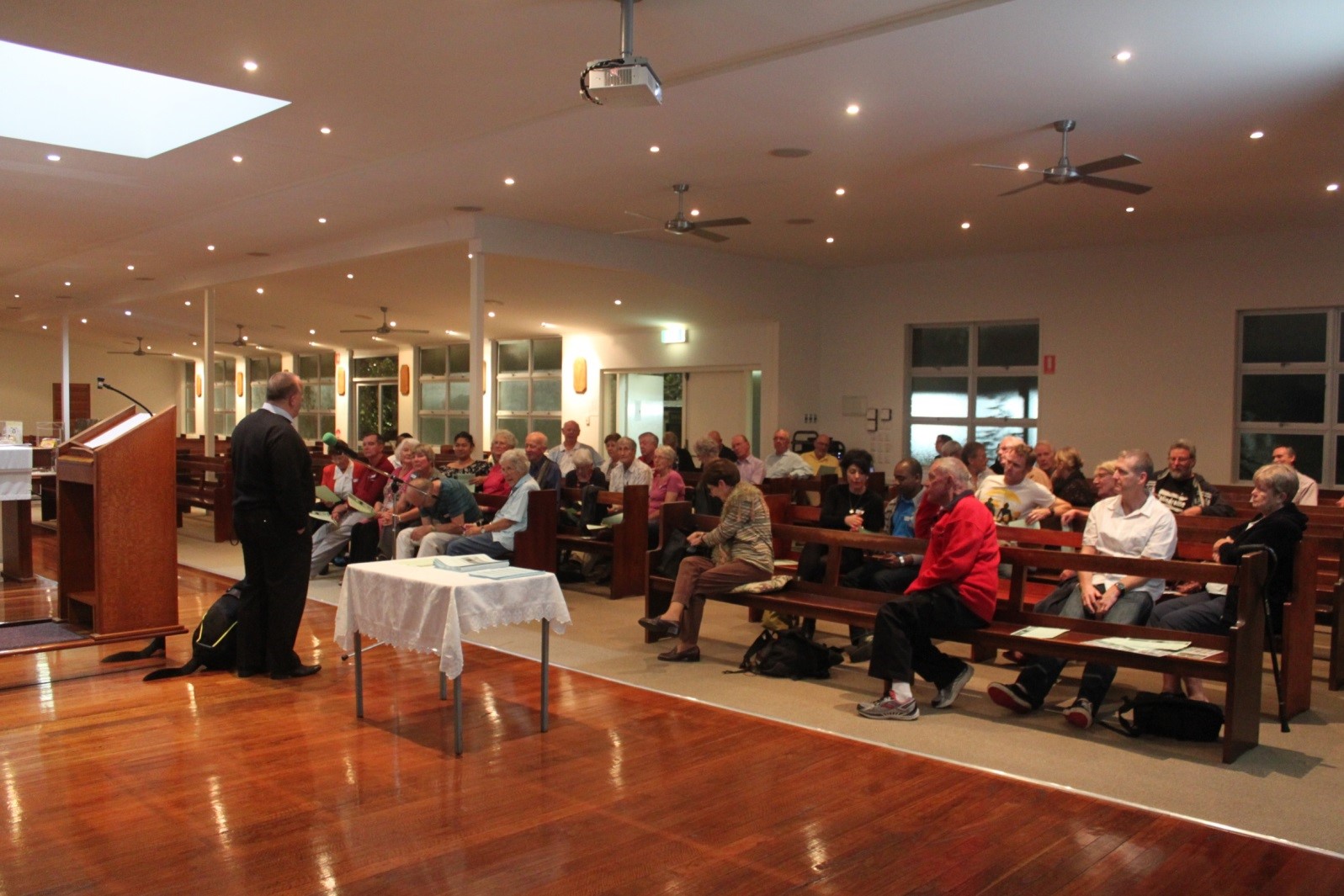 Caloundra is the southern gateway to the Sunshine Coast.  The parish is a community of communities through northern beaches and into the rural hinterland.

A member of the Justice Network saw an article about the Christian Climate Action Kit in the Catholic Leader and downloaded it from the ARRCC website. The first step for the Justice Network was to educate themselves. They were each given a copy of the Christian Climate Action toolkit, scientific papers (some from the Climate Commission) and “Let the Son Shine.  An Australian Catholic Response to Climate Change”, by Fr Charles Rue (Columban JPIC Office.) The same resources were also donated to the parish library.  The Action Kit was used at CCCSJN meetings, e.g. one meeting involved participants examining and sharing their thoughts on some of God’s simple objects of Creation – flowers, leaves, shells etc., using an exercise on page 29. 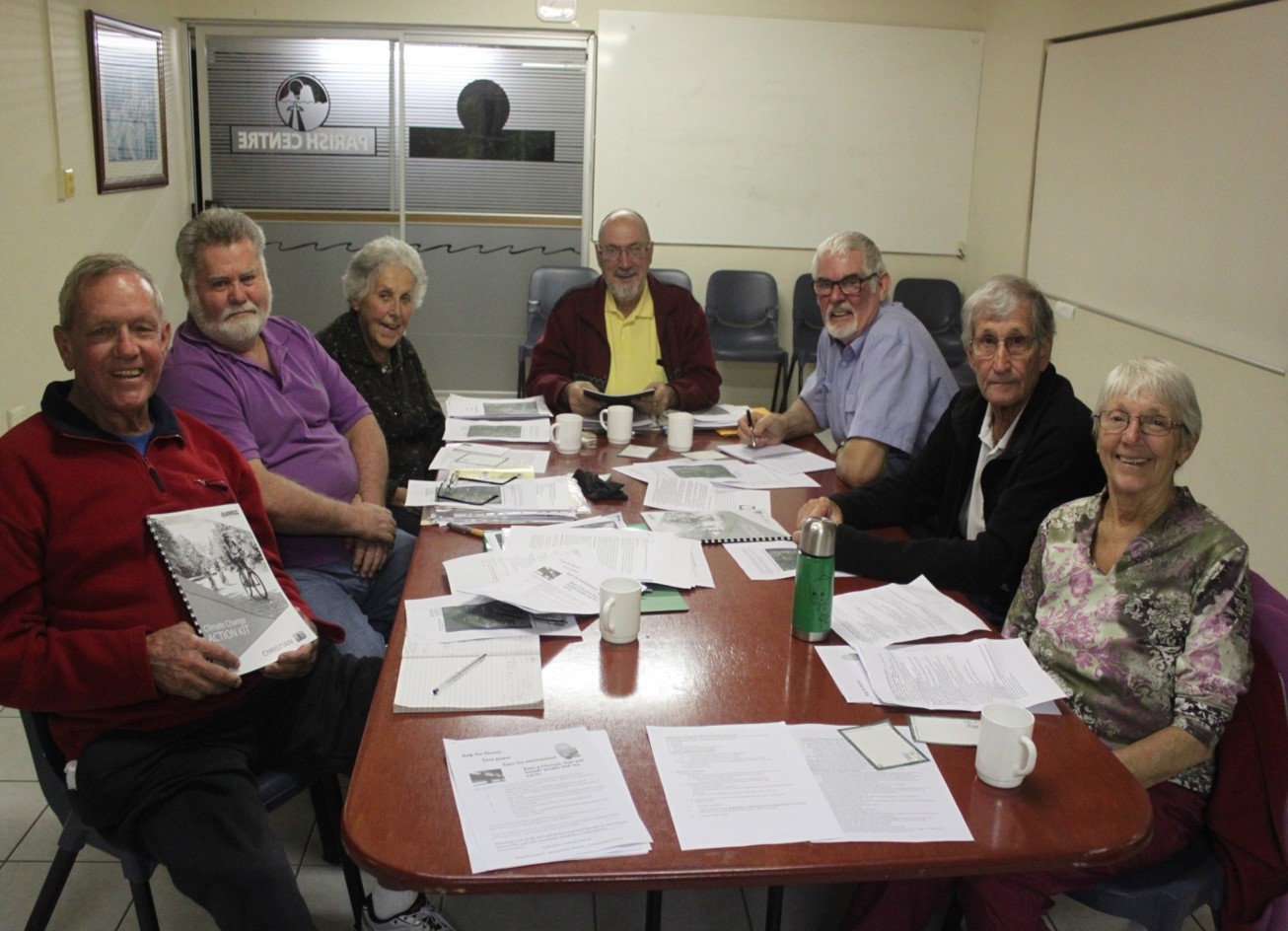 Engaging with the faith community

Guided by the toolkit’s Steps 2 Sustainability, the group chose to organise some seminars. One of the outcomes of these seminars was that others joined their group.

In 2013 the parish hosted a twilight seminar presented by eco-theologian priest Professor Denis Edwards.  At this seminar the ARRCC Climate Change Action Kit was introduced and fifty copies were handed out.

In another seminar in August 2014, the focus was the impact of climate change on peoples of the Pacific islands. Two speakers, one from the Pacific and one from the Torres Strait Islands, talked about their lived experience on the frontline, and Sr Wendy Flannery rsm offered her insights from her experience of working in the Pacific Islands. There was also input on the science.   Participants were invited to pledge prayer and action, and again the ARRCC toolkit was promoted.

The picture below features guest speakers at one of the Seminars organised: Uncle Thomas Sebasio & Malia Katalina Naupoto

The parish priest agreed to the request for an energy audit of Parish properties and best practice energy options.  The parish finance committee undertook costings and budget projections.  As a result, the Caloundra Catholic Church now has 125 energy efficient LED ceiling lights and 40 solar panels on the roof.

The parish also agreed to source altar breads and altar wines locally and to use china-ware instead of disposable plastic cups, plates etc. at parish functions.

The CCCSJN broadened their interest to the broader community by:

•Supporting the Sunshine Coast rally on the National Day of Climate Action by the attendance of some of its members.

•Participating in the Climate Change Relay, Noosa to Kings Beach on Sunday, 21 September, 2014.

•Liaising with the Caloundra Uniting Church with a view to sharing information on social justice issues, including climate change, and possibly holding future joint events.

All the while, short inserts relating to the Justice Network’s activities were being placed in the weekly Parish bulletin to keep parishioners informed on what is being done.

Happily the momentum for 2015 continues.  A seminar on climate change is planned for later in the year, with the main focus on Pope Francis’ encyclical on the environment.   This encyclical will be one of many social justice issues promoted on a new, large, free-standing ‘Social Justice Notice-board’ at the back of the Church.

Considerations could also include showing a climate change documentary such as ‘Years of Living Dangerously’ and a focus on resources such as the revised ARRCC ‘Climate Change Action Kit’, and the 2015 Academy of Science edition of the free booklet ‘Climate Change – Questions and Answers’.

CCCSJN members plan to invite the community to join them in taking part in the Global Catholic Climate Movement ‘Lenten Fast for Climate Justice’ on 17th March, St Patrick’s Day, the date assigned for Australia.

Picture (below) features Peter Arndt, from the Catholic Social Justice and Peace Commission, Brisbane Diocese speaking at a Seminar in Caloundra 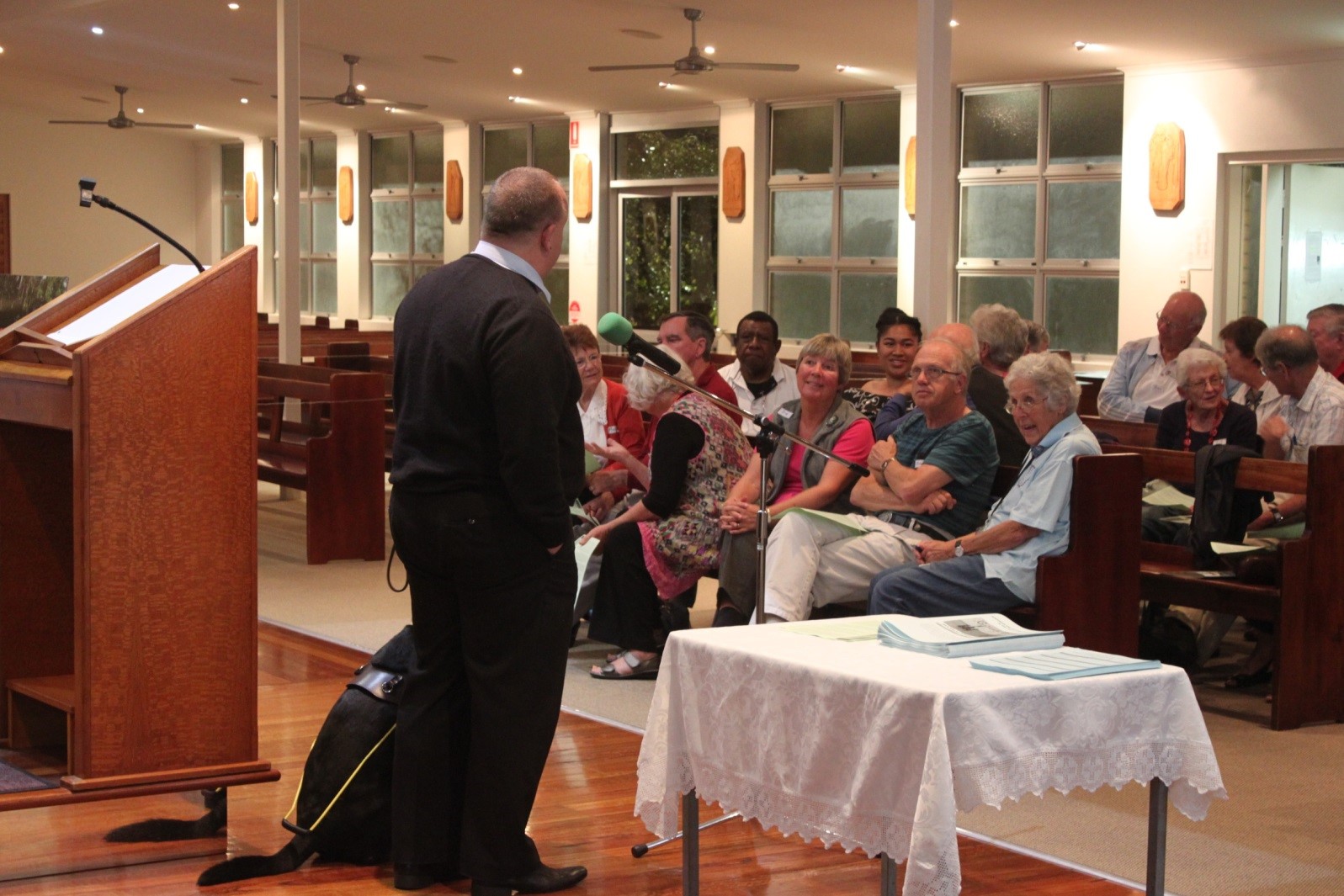