ARRCC has assembled a collection of statements by faith leaders in Australia and overseas, demonstrating the links between the beliefs of the world's major religions, and action on climate change. To read these statements, click on the links in the column on the right.

Their letter states: “Australia is a wealthy country that profits from exports that are causing the crisis. We hear the cries of anguish from those most vulnerable in the human family who are losing their lives, livelihoods and homes through climate-fuelled disasters.

“The current level of warming is not safe. This moment in history calls for an urgent, courageous, visionary response, especially from those in power. Australia’s leadership in this response, as part of its First Nations Foreign Policy, is vital for the vulnerable communities and ecosystems who depend on it.”

Rev. James Bhagwan, the General Secretary of the Pacific Conference of Churches, said, “We in the Pacific have welcomed the willingness of the new Australian Government to listen to the peoples of the Pacific.”

“However, coal and gas from Australia are a threat to our survival - and it doesn’t matter where they’re burned. Whether Australian coal and gas is burned overseas or on Australian soil, our homes and cultures are threatened either way. New coal and gas projects are a death sentence to the Pacific way of life and life in the Pacific,” he said.

Today in major cities across Australia, everyday people of faith are showing support for their message by attending multi-faith services for climate justice at cathedrals and other well-known places of worship. The cathedrals include St Paul’s in Melbourne, St Patrick’s in Parramatta, St Mary’s in Perth and St John’s in Brisbane.

The faith leaders have furthermore called on the Prime Minister to restart contributions to the UN’s Green Climate Fund. This is widely viewed in low-income countries as a crucial test of how seriously wealthy countries take their responsibilities. Other ‘asks’ are that First Nations peoples’ rights to protect Country are fully respected, that there be an orderly and supported transition for coal and gas dependent communities, and endorsement of a Fossil Fuel Non-Proliferation Treaty.

The proposed treaty aims to eventually stop the production and export of fossil fuels by participating nations. Noting that global emissions keep rising, advocates believe the current focus at climate talks on the consumption side of fossil fuels are undermined by the lack of international constraints on production.

The Treaty has already been endorsed by Pope Francis, the World Health Organisation, Vanuatu, and Tuvalu, among others.

As well as attending the public services today, some devotees spent the whole of last night together in meditation, prayer, chanting and in some cases fasting to show their depth of feeling about the issue.

Reverend John Gilmore, the President of the National Council of Churches said “This is about putting loving our neighbours into practice. The government needs to listen to our neighbours in the Pacific. This letter echoes what Pacific leaders said earlier this year at the Pacific Islands Forum: Australia needs to rule out new coal and gas and to stop subsidising those industries.”

The letter and the services were organised by the Australian Religious Response to Climate Change as part of a global faith campaign known as “Faiths 4 Climate Justice”. The campaign is taking place in over forty countries during the lead-up to the COP27 global climate summit in early November in Egypt, and advocates for the endorsement of a Fossil Fuel Non-Proliferation Treaty.

Over one hundred local faith communities across Australia from diverse traditions will hold events today as part of a major global multi faith Day of Action to ‘sound the alarm’ for the climate.  Across 40 countries, religious organisations representing 100 million members are holding actions to ‘sound the alarm’ at the yawning gap between what is required to limit global temperature rise and actual commitments by governments and financial institutions.

Churches will ring their Bells, Rabbis will sound the shofar, Imams will call the Azan and some groups will hold silent Vigils to draw attention to a series of calls on Prime Minister Scott Morrison for climate justice.

There will also be multi-faith Vigils outside the offices of the Prime Minister, Treasurer Josh Frydenberg and Special Envoy for the Great Barrier Reef, Warren Entsch.

The Day of Action is in support of a “Sacred People, Sacred Earth” Statement signed by very prominent religious leaders including the former Archbishop of Canterbury, Rowan Williams, and the Vatican Prefect of the Dicastery for Promoting Integral Human Development, Cardinal Turkson.

There are also high-profile Australian signatories including Bishop Philip Huggins, President of the National Council of Churches, and Bishop Vincent Long of the Catholic Diocese of Parramatta. The Statement has been signed by over 200 faith leaders and thousands of people from a very wide range of faiths.

The signatories seek net zero emissions for wealthy countries by 2030, a leap ahead of net zero by 2050. The Statement also calls for economic recovery money to be spent on renewables rather than fossil fuels, and that governments “must not perpetuate an outdated economic system that relies on fossil fuels and the destruction of the very forests, waters, oceans and soils that make life possible.”

Australian signatories are calling on Scott Morrison’s Government to submit higher emissions reduction targets that are in line with a net zero target by 2030 this year in the lead-up to the crucial COP26 negotiations in Glasgow. Instead of a “gas-led recovery”, they want post-COVID recovery spending to be on low carbon jobs, and for finance to be provided to the UN Green Climate Fund for developing countries.

In Australia, the lead organisation is the Australian Religious Response to Climate Change (ARRCC), which is part of GreenFaith International.

To sign the statement, go to Sign on to Sacred People, Sacred Earth! (actionnetwork.org) The full versions of the statement can be accessed by clicking the link to the translation in your language (in red) at the top of the page, eg, 'English', 'Arabic'.

Media Release: Faith institutions call for a just recovery by divesting from fossil fuels, 18 May, 2020
Bailouts and recovery packages must not empower polluters

As governments around the world make substantial investments in an economic recovery, faith communities urge them to think long term and focus on a recovery that is low-carbon and just.

Senior leaders from faith communities with over 10 million members across Australia have urged Prime Minister Scott Morrison to show leadership after Australia’s devastating summer by committing to stronger climate action and urgently scaling up the adoption of alternatives to coal, oil and gas. https://www.arrcc.org.au/letter

More than 150 religious leaders from across Australia have issued an open letter calling on Prime Minister Scott Morrison to recognise Australia’s moral responsibility to avoid climate catastrophe and halt all new coal and gas projects. The letter was organised by ARRCC. 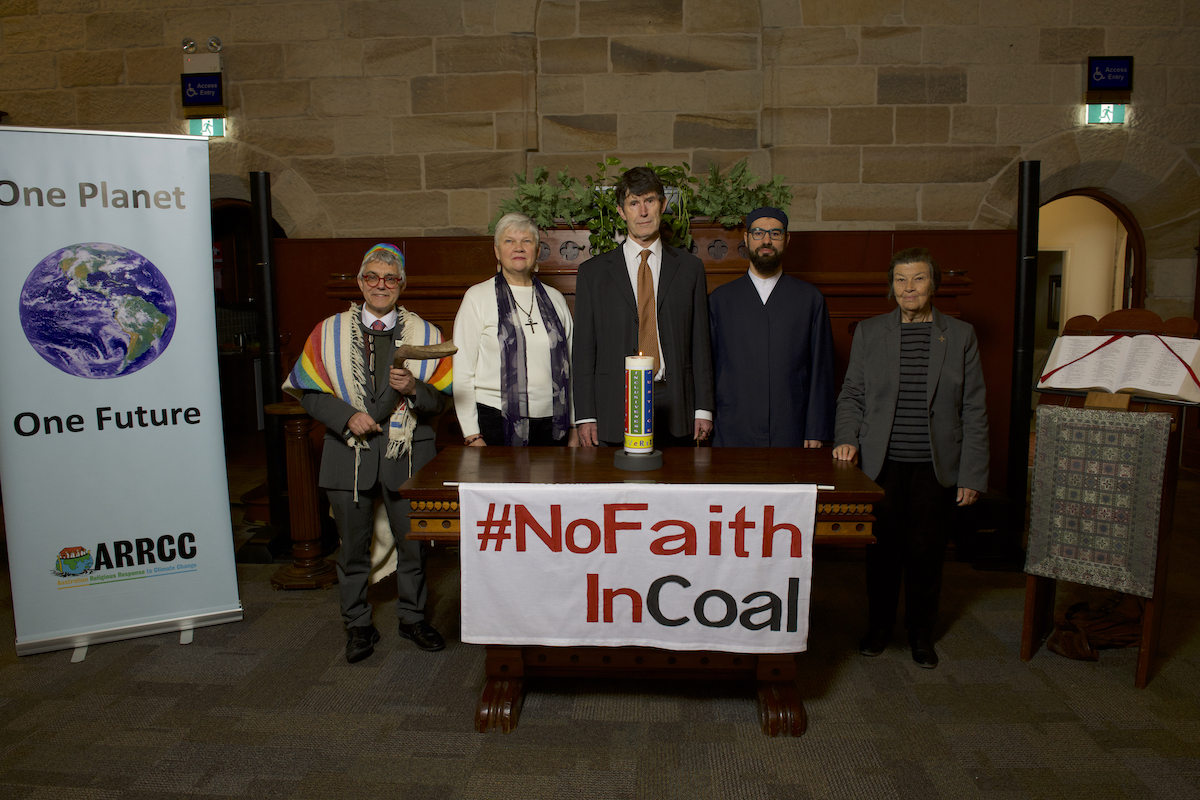 A Parliament of the World’s Religions Letter Urging Nations to Reaffirm Climate Commitments to the Leaders of COP24
November 20, 2018
https://parliamentofreligions.org/blog/2018-12-03-1659/parliament-worlds…

Declaration on Climate Change of the 2015 Parliament of World's Religions, 13 October, 2015

During the 23rd Conference of Parties climate (COP23) negotiations in 2017, an Interfaith Statement was published, “Walk on Earth Gently”. While it recognised the continuing importance of systemic change, it was an invitation to reduce our personal impact on the earth by reducing emissions from transport, food waste and home energy use, and by adopting a plant-based diet.

The Statement became the foundation for the current Living the Change initiative.

Statement of Faith and Spiritual Leaders, issued on October 20th, on the United Nations Climate Change Conference, COP21 in Paris in December 2015

ARRCC's Religious Leader Ambassadors have released a number of Open Letters on Climate Change, addressed to our political leaders and to the Australian Public.

The video clip below features a part of the letter originally composed in the lead-up to the 2013 Federal elections. These letters stand as evidence of the united stance of people of faith on climate change.

A Common Belief, a collection of statements from representatives of all major religions in Australia, compiled by The Climate Institute. 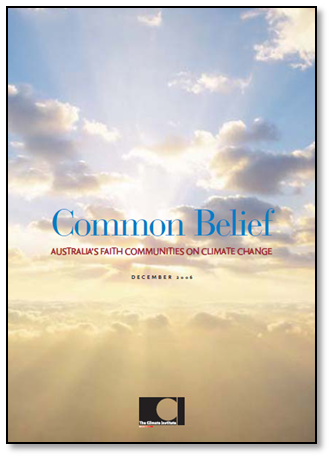