Symbolism of the Ark in ARRCC's logo 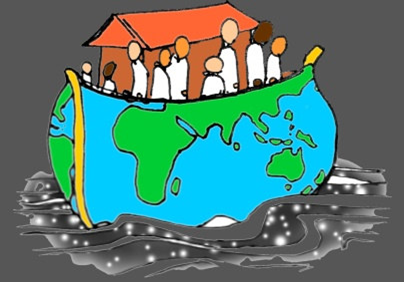 The ark in our logo is rich in symbolism. It carries a variety of meanings for the different religions and is a symbol which unifies ARRCC members.

The story of Noah's ark and the great flood is common to the Abrahamic religions – Judaism, Christianity, Islam and the Baha'i Faith. It tells of a divine punishment for human wickedness in the form of an enormous flood.

God saved only Noah (a righteous man), his family and pairs of each animal on earth. They all took refuge in an ark which Noah built while the waters rose. After the waters subsided, God promised never again to cause such a flood.

The symbolism of Noah's flood seems appropriate, given that our sea levels are rising and may rise further as global warming causes the Arctic ice shelves to melt.

But above all, the ark is a reminder of God's covenant with the ancient Israelites. They understood that their relationship with God gave them responsibility to care for the natural world. If they did not, their wrongdoing was manifest in environmental disaster - like droughts and floods. The whole earth suffered the consequences of human action.

The message we can take from the story is that God is not causing climate change - it is humanity failing in our responsibilities to each other and to creation.

The story of the flood as a drastic act of cleansing in response to humanity out of control is also found in the Eastern traditions, although without the same historical significance. There is a Buddhist version of the flood story, a "Tale of Merchants at Sea" and a Hindu version of Noah's Arke about the first incarnation of the Vishnu.

A second interpretation can be found in the Eastern concept of 'aggregates' – meaning the sum of all parts. The ark is made up of many parts. No part by itself is the ark, but together they make up the ark. The ark only exists through the interdependent relationships of its various parts, much like the earth's ecological systems. Because of this interconnectedness, our actions have consequences for ourselves and others. For example, as huge volumes of greenhouse gas emissions are released into the atmosphere right across the world, glaciers in the Himalayas begin to disappear, robbing millions of people and animals of a secure drinking source.

The message we can take away is that we must act ethically and morally for the good of all.

ARRCC also has another interpretation for the ark which illustrates the urgent need for climate action. Think of the climate as an ark on a choppy ocean. Under normal circumstances the boat rocks to and fro, and there is a risk it could be overturned by a rogue wave.

But now a group of passengers has decided to stand up and deliberately rock the ark. Someone suggests that this is likely to increase the chances of capsizing. Soon another passenger proposes that with his knowledge of chaotic dynamics he can counterbalance the passengers rocking the ark – along with the natural rocking caused by the waves. But to do so this passenger needs an array of sensors and technical resources. Furthermore, he can't guarantee this untested system will work and not make things worse.

Is the answer to a known and increasing human influence on climate an ever more elaborate system to control the climate? Or should the people rocking the ark just sit down?

Together we inhabit the earth, our 'planet ark', as we journey through life. Now is the time to realise our shared predicament and work together.