Make a commitment online and be part of Living the Change

We invite you to join us in making a commitment to a sustainable lifestyle as part of Living the Change, a global multi-faith campaign coordinated by GreenFaith in the US. You can now use the more streamlined commitment tool devised in April 2019:

At this site, you can make a pledge, which says that you will actively take an interest in this aspect of your life; or a commitment, which says you will make a lifestyle change which will reduce your personal emissions. When you are making a commitment, note the "Find suggestions here" button towards the left of the screen, where there are rich resources to help you think through what changes you could make and why.

A Christian reflection on COVID-19 and Creation

Much has happened since this page was first posted. Readers may like to read a reflection by Christian, Mark Delaney, on his experience of the COVID-19 lockdown and what we, in Australia, might learn from this extraordinary time. Mark made a huge contribution to the success of the Living the Change campaign in 2019 is a co-author of Low Carbon and Loving It.

About Living the Change

Living the Change upholds two of our deepest convictions:

While world leaders have agreed to keep global warming to a 1.5⁰C limit, current trends have us headed for at least twice that level and a truly devastating future. We urgently need a massive reduction in greenhouse gas emissions as soon as possible.

Clearly, strong government policies are vital to addressing the climate crisis.  We also recognise that environmentally sustainable lifestyles can and must be part of the solution.  Such living commitments are inherently good and can help transform the world’s cultures so that the proper laws and policies gain the support they richly deserve.

The Living the Change campaign is our response to this higher calling.  We invite you to join us by making a personal commitment to walk more gently on the Earth.  Please, help us honour our precious planet.  Become part of our globally-connected community of consciousness and conscience.

You can make a commitment in three areas of behaviour – transport, home energy use, and diet – which leading scientists have identified as critically important for truly sustainable lifestyles. Hundreds of people representing diverse faiths and cultures all around the world have already made commitments, some of which were presented by GreenFaith at the UN climate negotiations in Poland. In 2019 ARRCC will further promote this important dimension of climate action in Australia, along with Religions for Peace, the National Council of Churches, the Faith Communities Council of Victoria and the Multi-Faith Association of South Australia. 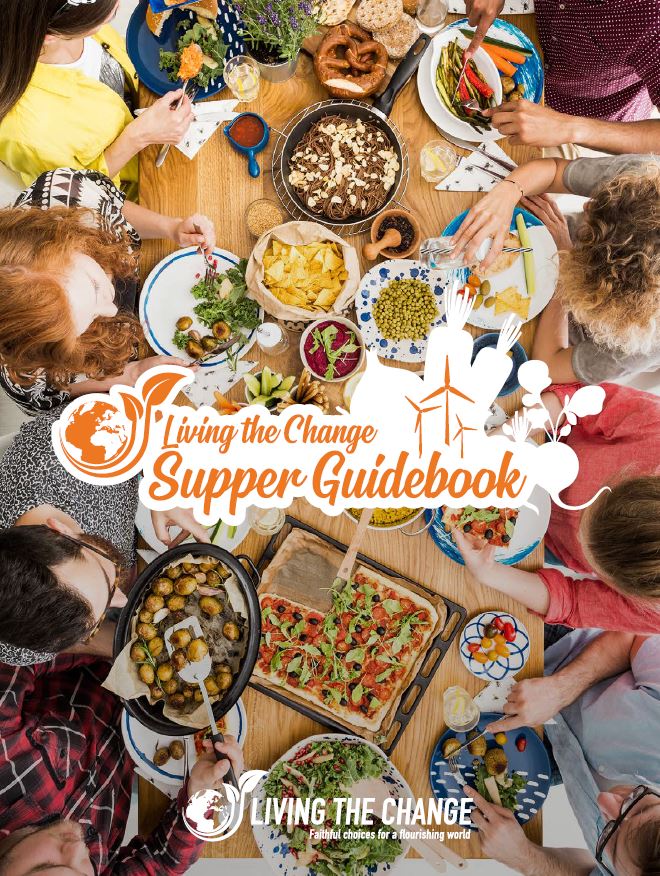 Introduce Living the Change to your friends

The campaign has packaged up resources for anyone to introduce Living the Change at home through a guided Supper. The idea is a simple one. Invite people that you know who share a commitment to their faith and/or who are concerned about climate change and, over a meal, talk through questions that help them reflect on their lifestyle choices. In an accepting context, people can open up about their struggles to live more climate-conserving lives amidst a culture which promotes consumption. Talking with friends about a possible commitment to make increases their chances of sticking to it.

See the Suppers Guidebook here. Feel free to adapt the steps described to suit your own style and your guests.

The Guidebook is the long version, but you may find it easier to use this 2-page Run Sheet, which you could also adapt to your own situation.

“Living the Change: faithful choices for a flourishing world” is a globally-connected community of religious and spiritual institutions working together with sustainable consumption experts to champion sustainable ways of life. The website is: https://livingthechange.net/

Living the Change was initiated at the UN Climate Conference in 2017 by the US-based multi-faith organization, GreenFaith, an interfaith organization whose mission is to educate, organize and mobilise people of diverse faiths to become environmental leaders. Serving to coordinate Living the Change, GreenFaith now has Implementing Partners who collaborate to shape a vision for a worldwide community of practice which drives lifestyle-related emission reductions.

Can lifestyle change make a difference?

The campaign emerged, in part, from a study which showed that “if the world's top 10 percent of carbon dioxide emitters were to cut their emissions to the level of the average European Union citizen, global emissions would decline by 33 percent. If the top 20 percent were to do so, the reduction would be about 40 percent.”[1]  In other words, while structural change is legitimately pursued as being potentially most effective in creating change, individual behaviour change within a targeted demographic can indeed make a meaningful contribution to stabilizing the climate.

Given that close to six billion people identify with a religion (Pew Research Center, 2017), the opportunity for these groups to create meaningful change through collective action cannot be ignored. In Australia, the 2016 census showed 60% of the population identified with a faith tradition.

There’s also the difference it creates in me, the individual. The more we act in ways congruent with science which tells us that climate disruption is a major threat, the more our determination to make climate action a priority can grow. By acting in line with my values, my integrity grows and, hey, fewer greenhouse gases actually go into the atmosphere! The various faith traditions value individual responsibility, and each person is intrinsically important.

What are people being asked to do?

Living the Change invites individuals to fortify healthy, balanced relationships that help sustain the earth. The three areas where religious leaders and people of faith will be asked to take steps are:

Leaders in faith communities are encouraged to make their pledges to lifestyle changes publicly and promote these changes in their communities. We are seeking faith leaders who will help us promote the campaign.

Are there times of celebration?

Yes! There will be a week later in 2019 (probably in October) where people’s commitments will be celebrated. There were 8 such events held in Australia in 2018. 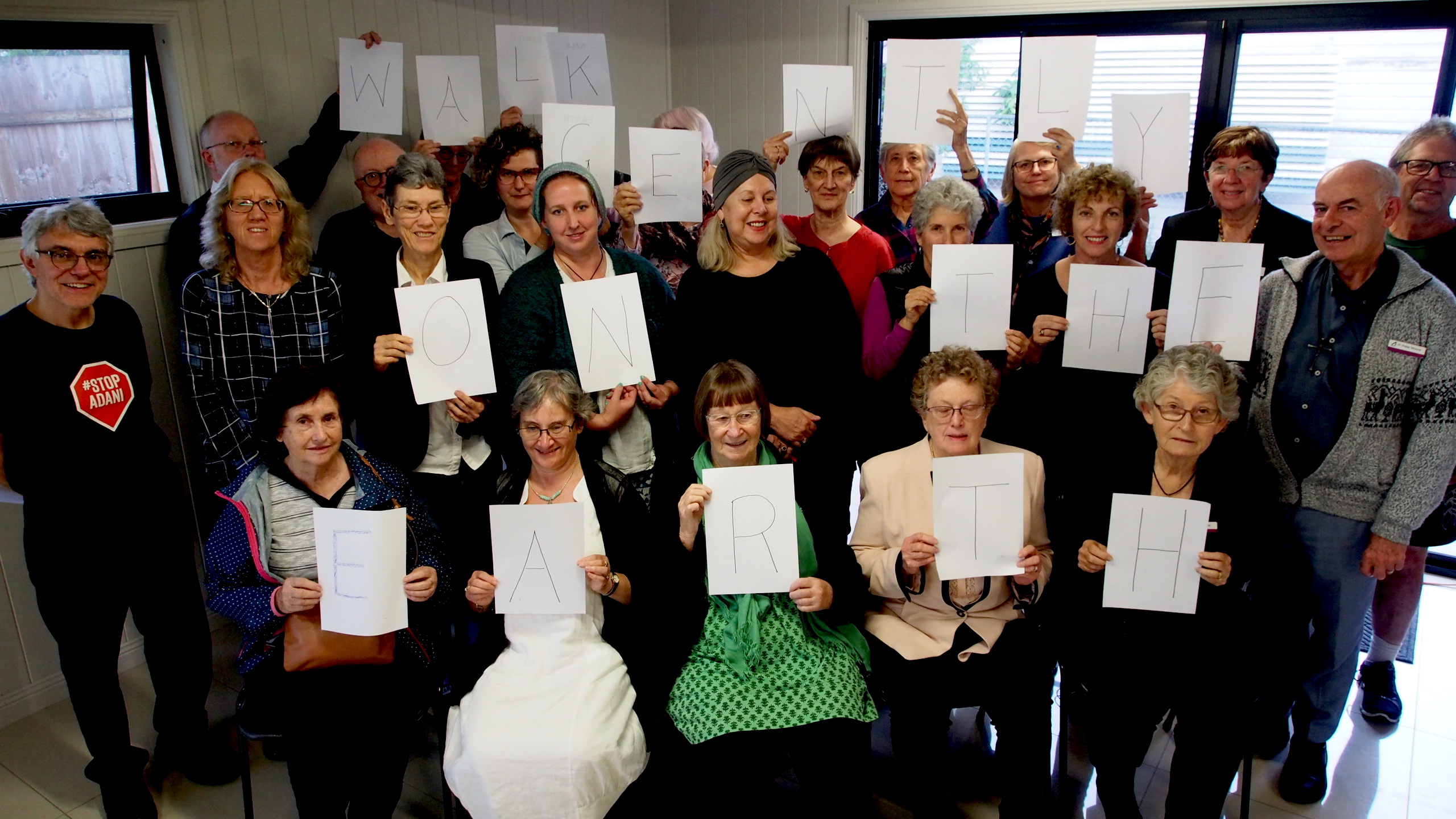 Week of Living the Change event in Brisbane.

Why make commitment publicly, why not remain private about it?

We especially need people who are relatively wealthy to scale down their carbon footprints, but this fact is not widely accepted in wealthy societies like Australia. It is counter-cultural.

Culture is defined by what is accepted as normal in any given society, which in turn is defined by the common practice of its citizens. If citizens more commonly use public transport than drive a car, then it is more normal to catch public transport than drive a car. We shift culture by doing things differently and letting others know we are doing things differently.

Right now, the earth needs human society to shift towards plant-based protein in our diets, the use of public transport and using renewable sources of energy. To create this shift, there needs to be a shift in what is considered ‘normal’, a shift in culture.

We know that faith leaders help shape culture, so we need them to step up and take a lead with this cultural shift towards sustainability. There is limited benefit in making lifestyle changes privately. It is by making the changes public that the shift in culture can be created.

How does Living the Change relate to our spiritual traditions?

According to Gopal D. Patel, Director of the Bhumi Project: "Hindus are encouraged to lead lives that uphold and sustain the natural order and balance of the world. Sustainability, therefore, is a central pillar of Hindu life."

Dr. Chris Elisara, Director of the Creation Care Task Force for the World Evangelical Alliance: "Evangelicals caring for God’s creation know that our faith-consistent personal choices are important. Choices like eating more plant-based meals or changing our driving or flying habits are not easy, and they are often counter- cultural, but they are ways we can be faithful to God’s calling on our lives to care for the gift of creation."

Kristin Barker, Director and Co-Founder of One Earth Sangha: "The Buddhist tradition teaches that each of us is deeply woven into the web of life; we are not separate. The suffering of others is ultimately our suffering, so each of us has a direct interest in reversing climate change.”

Nana Firman, Co-Founder of Global Muslim Climate Network: "We live at a time of unprecedented catastrophic destruction to people and the natural world. As Muslims, we are obligated by our faith and by our shared humanity to stand up and make the changes necessary to avoid further future disasters. Together with people of other faiths, we must show that there is a better way as stewards upon this earth."

Videos of people Living the Change

The Right Reverend Bishop Philip Huggins, Anglican Archdiocese of Melbourne, Oodthenong Episcopate, and President of the National Council of Churches in Australia