Work for a Fair Democracy #OurDemocracy

The Human Rights Law Centre, the Australian Conservation Foundation and the Australian Democracy Network are building a broad coalition for a better democracy, where our elected representatives put Australians’ interests first, not those of their wealthy donors and mates. ARRCC has joined this coalition.

We have joined because there seems no other reasonable explanation for the fact that our current federal government refuses to legislate sensible policies to keep us – and life on this precious planet – safe from climate change. It is not convinced by increasingly verified scientific warnings, clear ethical guidance, the availability of ever-cheaper clean technologies, not even shifts in popular opinion. What has become clear is that a major block to legislated national climate action is that the major political parties are captured by corporate interests. 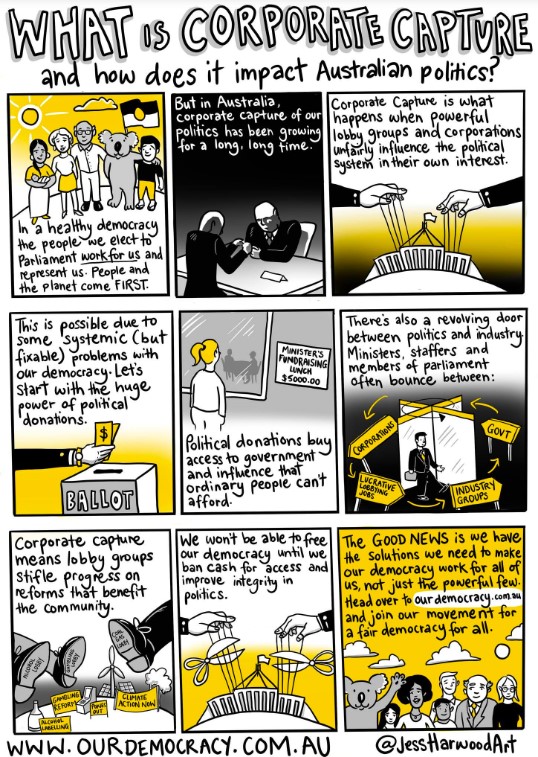 Please sign this petition (started 25 Aug, 2022). We’re calling on the Albanese Government to pass legislation to fix political donations, election spending, and lobbying in their first term. Join us in demanding the Albanese government end cash for access by:

Background to the campaign

Much has been written now on the influence of corporate donors and the “revolving door” between politics and corporate power brokers. Examples are Big Coal: Australia’s Dirtiest Habit, by Guy Pearse, David McKnight and Bob Burton, and Games of Mates: How Favours Bleed the Nation, by Cameron K. Murray and Paul Frijters. Instances of unethical behaviour are frequently exposed by journalists.

The ABC’s two-part factual series released in October 2021, Big Deal, communicates the basic issues to everyday Australians in an effective and entertaining way; and is readily available on iview: https://iview.abc.net.au/show/big-deal

This issue affects other matters of social justice too. Whether community organisations are working to combat climate change, to stand up for workers’ rights, to minimise gambling harm or to keep our gun control laws strong, we are facing the same problem: powerful and harmful industries are resisting regulation for the common good.

Weak laws allow powerful industries and lobby groups to exploit democratic processes for their own financial gain. Even when exposed, there are rarely consequences for morally corrupt behaviour.

Australia lags far behind other jurisdictions when it comes to regulating political donations, election spending, lobbying and the spread of disinformation in elections.

The proposal for a legislated Federal Integrity Commission has been part of the response, which the current government has delayed and attempted to weaken by proposing its own legislation - a toothless, opaque version of the original.

After a long period of research and consultation across civil society, from grassroots organisations to academic experts, the Fair Democracy Network has created this Framework for a Fair Democracy. The Framework can be endorsed by individuals as well as organisations. Of course, ARRCC has of endorsed it:  https://www.ourdemocracy.com.au/the-framework/

Introduce an enforceable code of conduct for politicians

Strengthen the institutions that keep the federal government in check

Shine a light on secret donations

Stop corporations from spending millions on campaigning against regulation

ARRCC Is very grateful to our colleagues in ACF, the Human Rights Law Centre and the Australian Democracy Network for taking the lead in this important work.

The Australian Democracy Network launched a report Confronting State Capture: how corporations have eroded our democracy, and what we can do about it.

It breaks down six modes of influence used in state capture, and explores two case studies in detail. It sets out four recommendations on how to confront state capture. It explains what's stopping progress on the biggest issues of our time.

If you'd like to view the joint briefing with Human Rights Law Centre, you can find watch a recording here. 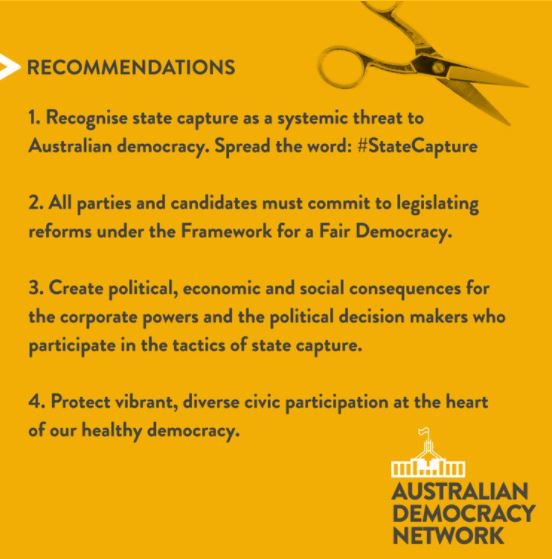 Re proposed changes to ACNC regulations: ARRCC made a contribution to this huge win for democracy on Thursday 25 November: the Senate rejected new Government regulations which would have had a silencing effect on Australian charities. This win ensures the long tradition of charitable advocacy continues. #HandsOffCharities
The Federal Opposition and crossbench joined forces to disallow regulations which would have granted the Federal Charities Commissioner the power to investigate and deregister charities on a whim. A crossbench disallowance motion put forward by South Australian Senator Rex Patrick was successful in the Senate by 24 votes to 19, effectively stopping the Government’s proposal in its tracks.
Re lowering “political campaigner” threshold for spending on advocacy pre-elections: The ACNC regs win was followed, however, by a more disappointing outcome in relation to this second issue.
Previously, when organisations incurred over $500,000 in electoral expenditure over a financial year, they became “political campaigners”, they had to make additional disclosures and had greater restrictions on the international philanthropy (foreign donations) they were allowed to receive.
In late November, Labor agreed to support the Coalition's proposed changes to the legislation but insisted that "political campaigner" be replaced by "significant third party", and the lowering of the threshhold of election-related expenditure to $250,000.
Now, when organisations incur over $250,000 in electoral expenditure over a financial year, they will become “significant third parties”, and have the same additional disclosures and restrictions on foreign donations. In addition to this, once you fall into this category of significant third party, a significantly broader definition of electoral expenditure applies to you: rather than disclosing expenditure on advocacy for the dominant purpose of influencing votes, you have to disclose expenditure “in relation to an election”. This is obviously a far broader a more vague definition, and organisations will likely require legal advice to understand what’s included.

Why is this law so bad?

We have mitigated some of the worst aspects of the Government’s attempts to achieve this, but not all of them.

Why ARRCC supported this campaigning (August 2021)

ARRCC is concerned that directions being taken by the Morrison Government, if implemented, would be have a chilling effect on advocacy for a safe climate, just when it is most needed. Therefore, ARRCC participates in a closely related initiative coordinated by the Australian Democracy Network called Hands Off Our Charities. HOOC is an alliance of over 60 charities, which formed in 2017 in response to a number of bills which would have silenced charities on issues of national importance.

Although the Morrison Government has opposed measures to ensure more fairness and accountability in government processes, they have pushed for reforms that increase the burdens on charities and other organisations that advocate for the common good. This is the second time charities have had to organise to defend themselves in the last few years.

While claiming to be “too busy” to address the issues of a Federal Integrity Commission or Zali Steggall’s Climate Change Bill during the pandemic, the Coalition Government has nonetheless found time to draft and push for:

(a) tighter regulations on the advocacy work of charities, to be enforced by the Australian Charites and No-for-profit Commission (ACNC) and

(b) legislation that would lower the “political campaigner” threshold for spending on advocacy during periods leading up to an election.

Throughout much of 2021, HOOC has been fighting these threats.

ACNC regulations are not subject to legislation but are put forward by the Minister, in this case the Assistant Minister for Finance, Charities and Electoral Matter, Senator Zed Seselja. They can potentially be blocked by a successful disallowance motion in the Senate.

Essentially, the Government’s proposed new regulations would create a much broader range of pretexts on which charities could be deregistered.

The effect would be to discourage charities from promoting and having a presence at common peaceful protests. It would also make it much harder for charities to share their resources with community groups to support their advocacy. The regulations could introduce unnecessary red tape for virtually every one of Australia’s 59,000 charities, and again, threaten them with deregistration if they fail to comply.

The proposal is disproportionate and punitive, and could see charities shut down by the regulator because of very minor and inadvertent breaches of the law, or for failing to keep documentation proving their compliance. It also exposes them to pre-emptive punishment if the ACNC Commissioner believes they are likely to breach the regulation in the future.

This treatment is unprecedented. Neither for-profit corporations nor political parties can be deregistered because a staff member commits — or is deemed “likely” to commit — a minor offence.

ARRCC is very grateful for others taking the lead in protecting the charities sector.