Sydney, November 11 — Leaders from global faith groups, financial institutions and foundations called on sovereign wealth and superannuation funds to rapidly end trillions in investments related to fossil fuels and invest in renewable energy in line with the Paris Agreement. 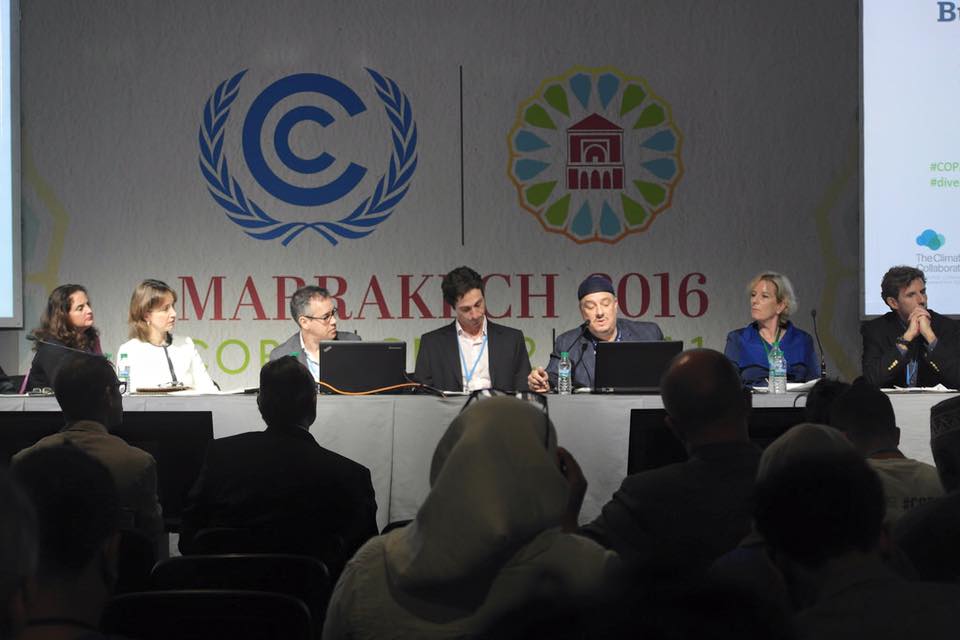 Eminent leaders from across faith traditions in Australia and around the world joined together in the powerful call to action, contained the COP22 Interfaith Climate Statement. The Statement was released overnight at Building the Divest Invest Movement with Faiths, Foundations and Finance, an official side event of the COP22 UN Convention on Climate Change, which began November 7 in Marrakech, Morocco.

The Statement included a set of imperatives designed to speed a transition to a low carbon future in a timeframe consistent with the goal of limiting temperature rises to 1.5°C above preindustrial levels. The calls included shifting public finances away from fossil fuels, increasing financing to end energy poverty with renewable energy, and ensuring a just transition that protects human rights and vulnerable communities.

The faith and spiritual leaders urged their communities for more commitments to divest from fossil fuels and invest in renewable energy, with the Islamic Society of North America (ISNA) releasing a major announcement that it would commit to divest its investments from fossil fuels and encourage its two constituent organizations and five national affiliated institutions to do so as well. This marked the world’s first divestment announcement from a Muslim institution.

“According to Islam’s most basic and fundamental teachings, human beings have been uniquely charged with the great responsibility of being Guardians of the Earth. It goes against the mission of the ISNA to invest in fossil fuel companies whose operations and products cause such grave harm to humanity and to Creation,” said Dr. Azhar Azeez, President of the Islamic Society of North America.

In Australia, Thea Ormerod, President, Australian Religious Response to Climate Change, pointed to the need for urgent action on climate change: “The world has lost precious time in the last few decades, as countries have held back from acting with wisdom, self-transcendence and care for the global common good. Now change needs to happen at emergency speed. We pull together as a human community, or we all lose.”

Rev. Dr. Vicky Balabanski, Director of the Forum on Religion and Ecology, noted that “Each religion speaks about issues of value and meaning, and I urge the decision makers to recognise that this united call of religious leaders is about the fundamental value of preserving and valuing life — of humans, others species and eco-systems, whose flourishing is threatened by climate change. In order to preserve and enhance our shared life, we need to act now and scale up action on climate change.’

Anne Markey, Lead for Goolwa Dharma Group and the Ashtree Sangha in Adelaide, pointed out that “Our world is dependant on us and we are dependant on our world. With this comes a call for responsibility, care and understanding. Every effort must be made by every human being to honour this connection. We now have a precious opportunity to act collectively to heal our world,our earth, our mother, our body.”

More than 30 faith-based organizations from around the world collaborated on the Statement and handover event, including several based in our region.

The event also included presentations by philanthropic foundation leaders. Mark Sainsbury, Chair of the Mark Leonard Trust, made the financial case for divest invest: “The Paris Agreement, new regulations and technological innovation will see fossil fuel companies lose value and market share to sustainable energy technologies. In fact, it’s happening already. We’re in a sustainable energy revolution and I believe it’s wiser to invest in the low carbon technology of today and tomorrow, not the high carbon technology of yesterday,” he said.

Ellen Dorsey, Executive Director of the Wallace Global Fund, stated, “Governments have significant influence on global finance with their investment assets. Nations can play a critical and stabilising role in expediting the transition from a fossil-fuel based economy to a net-zero carbon economy, mitigating the financial and humanitarian risks of dangerous climate change. Nations’ sovereign wealth funds must be invested consistent with the commitments made in Paris.”

Rev Fletcher Harper, Executive Director of US-based GreenFaith said, “Religious and spiritual communities recognize that the earth is a gift, and that it is our responsibility to protect it.  In the face of the climate crisis, we are all required to act and to immediately shift away from fossil fuels and toward clean energy. Faith communities are also united in their concern to care for the most vulnerable and are committed to bring distributed, clean power to the 1.1 billion people globally who lack access to electricity by 2030.”

The side event was hosted by GreenFaith and Divest Invest. GreenFaith is an interfaith environmental organization that inspires, equips, and mobilizes diverse faith communities for environmental action. Divest Invest encourages individuals and philanthropic institutions to accelerate the transition to a clean energy future.

▪       List of faith-based groups that collaborated on COP22 Faith Statement

▪       Photographs from the event are available at no cost. Use credit as provided.