Pope urged on divestment by Catholic Bishops of Philippines

On the eve of the much awaited Papal visit in the Philippines, local faith groups, theological schools, and development organizations in Manila came together to urge Pope Francis to help usher in a fossil-free era to address the climate crisis.

Bishops and secular climate movement speak as one 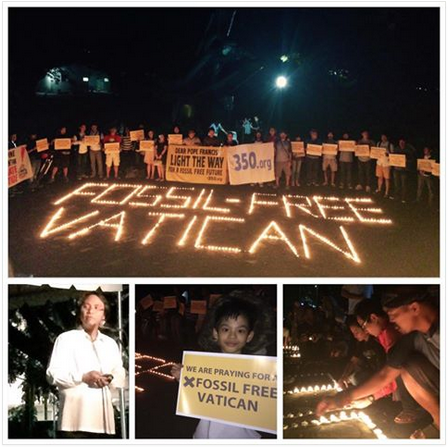 On the eve of the much awaited Papal visit in the Philippines, local faith groups, theological schools, and development organizations in Manila came together to urge Pope Francis to help usher in a fossil-free era to address the climate crisis.

Since taking office, Pope Francis has issued several statements in recognition of scientific findings confirming human responsibility for climatic changes and has called on world leaders to take the necessary actions to address the current climate crisis. Later this year, the Pope is expected to present an encyclical on ecology and man’s relationship with nature to serve as a letter of guidance sent to 5,000 Catholic bishops and 400,000 priests with the goal of reaching the world’s 1.2 billion Catholics worldwide.

Read the statement below.

On the occasion of the coming of Pope Francis to the Philippines and his solidarity visit to the typhoon-devastated community, we, in the Church and civil society organizations bring before the Holy Father one important concern that urgently needs Church moral intervention. We refer to the issue of climate change, causing climate-induced disasters and extreme weather events, resulting to catastrophic misery to our people as in the case of super typhoon Haiyan.

The Philippines tops the list of countries most affected countries by weather-related disasters like storms, floods, and heatwaves. Yearly, extreme weather events claim the lives of people and displace families. Facing hunger, increased mortality due to temperature increase, more destructions from extreme weather events, the Philippines is at the doorstep of all the major threat of climate change.

“But tragically, ours is a continent of massive poverty, where few enjoy great progress and prosperity while the many suffer in abject deprivation. And it is the poor and the needy who suffer most from the consequences of climate change. We are experiencing dramatic changes of season, extreme changes of weather, more frequently recurring and stronger typhoons, destructive flooding, drying up of whole areas, decrease in food production and spread of climate change related diseases.”

As early as 1988, the Catholic Bishops’ Conference of the Philippines (CBCP) had already articulated the urgency for our faith to take on the ecological challenge: “At this point in the history of our country it is crucial that people motivated by religious faith develop a deep appreciation for the fragility of our islands’ life system and take steps to defend the earth. It is a matter of life and death.”

Clearly, climate change is a moral issue that we in the Church cannot remain passive bystanders. It is for this reason that the Bishops Conference in Asia categorically admits: “As Church we are challenged by this grave situation, since climate change is an ethical, moral and religious issue.”

As categorically declared by the Holy Father, Pope Francis, in his message to the UN Convention on Climate Change, we believe that: “The effective struggle against global warming will only be possible with a responsible collective answer, that goes beyond particular interests and behavior and is developed free of political and economic pressures. It is only possible with a collective answer that is able to overcome attitudes of mistrust and to promote a culture of solidarity, of encounter and of dialogue able to show the responsibility to protect the planet and the human family.”

Therefore, we appeal to the Holy Father to support us in seeking solidarity and justice for the communities affected by the climate crisis.

We need a global climate deal in Paris that will prevent the world from heading towards a catastrophic warming of 5 degrees. We appeal for the Church to encourage governments and political leaders to work together and commit to a global goal, based on science, of limiting warming to the safest level which is below 2 degrees.

Governments of the North, of rich industrialized countries, should commit to and deliver fully and unequivocally their fair share of the effort to solve climate change and ensure a full repayment of the emissions debt owed to the peoples of the South.

On the other hand, governments of the South, of developing countries, should stop following the same path of profit-led, destructive high-carbon growth taken by developed countries that benefit only the elites. They should start taking on their fair share of the global effort, and be unrelenting in claiming climate finance and technology from developed country governments for South countries to undertake mitigation actions over and beyond their own fair share of the global effort.

We appeal the Holy Father to join us in demanding all governments to commit to:

We appeal to the Holy Father to support us in seeking an end to investments in fossil fuel and ecologically-destructive projects.

Continued burning of fossil fuel will exacerbate the impacts of the changing climate. Mining and other eco-destructive projects which aggravate the climate crisis must be critically evaluated or shunned altogether. To have at least a 50 per cent chance of limiting global warming below 2 degrees throughout the twenty-first century, the cumulative carbon emissions between 2011 and 2050 need to be limited to around 1,440 gigatonnes of carbon dioxide (Gt CO2).

Unabated burning of fossil fuel reserves will result to missing the 2 degree target. To prevent catastrophic climate change, most of the fossil fuels must remain in the ground. Global reserves corresponding to 33% of oil, 49 % of gas, and 82% coal should be classified as unburnable reserves in order to prevent dangerous climate change of more than 2 degrees, under the assumption that carbon capture storage (CCS) will be a widely deployable technology. The amount that must be kept in the ground will increase if CCS is unavailable.

Investing in fossil fuel companies and in eco-destructive projects is synonymous in supporting the destruction of our future. Divestment provides the means to change this status quo – to shift towards a system that will prioritize the welfare of the people and of nature over the relentless pursuit of profit.

To conclude, we are one with the Church in asserting that climate change is an urgent issue that is clearly related to our Christian responsibility to care for the earth and to care for the poor and vulnerable in our midst. The social teachings of the Church are replete with pastoral exhortations invoking for environmental stewardship, social and inter-generational justice, the use of earth’s resources for common good, authentic development, and service for the poor and the vulnerable. All those principles are at stake of being violated when we do not avert or address the causes of climate change.

It is to this end that we welcome Pope Francis to the Philippines, with the hope that our advocacy for the care of the earth and for genuine development and justice for the poor will be taken up as part of the major agenda for his pastoral visit.

SIGNED by the Catholic Bishops’ Conference of the Philippines (CBCP)/National Secretariat for Social Action (NASA)/Caritas Philippines and the Philippine Movement for Climate Justice (PMCJ).