Photo credit: Julie-Anne Richards
For this summary, we have drawn from a report by our our friends in Climate Action Network Australia who are at COP26. It could rightly be said that much depends on pledges being acted on and, even then, they fall short of what is needed. However, the first week saw many encouraging announcements and pledges from world leaders - a major slowing of deforestation, a methane pledge and, for the first time, signalling the phasing out of coal if the pledges come to fruition.
(Read past this article for opportunities for prayer and meditation, and for hearing reflections from people of faith at COP26.)

Low-income, climate-impacted countries such as Pacific Island States have had less representation in Glasgow than usual, but they have been courageously vocal on the need for greater ambition. Civil society groups have also been peacefully active, even though they are disappointed at not being able to get near any of the negotiators. It is estimated that 100,000 people participated in the Global Day of Action march on Saturday 6th November.

Advocates have been highly critical, even angry, that all the pledges do not actually add up, even if implemented, to enough action to keep warming to under 2°C, much less under 1.5°C. Also, wealthy countries have continued to be tardy on stumping up rightful amounts of finance for the Green Climate Fund, promised in Paris. The US$100 billion annually is a very small amount when compared to the trillions spent by wealthy countries on their responses to COVID.

On the other hand, there has been a series of significant pledges which are reasons to remain cautiously hopeful. The world is changing, and quickly when compared to the usually slow march of history.

More than 140 countries submitted updated 2030 NDCs before or at COP. Australia was not one of these countries, submitting the same 26-28% reduction on 2005 levels as first submitted by the Abbott Government, but the 140 did include:

Over 100 countries, including Australia, committed to the Glasgow Leaders' Declaration on Forest and Land Use, backed by commitments of US$12 billion in public and $7.2 billion in private funding.

There were a range of announcements outside the UNFCCC:

Regrettably, Australia's NDC's for 2030 remain well below those of comparable economies and the message that Australia will reduce our emissions through the use of technology has been met with scepticism and disdain. In general, Australia continues to be the climate laggard at COP26 that it has been since the change of government in 2013. The only bright spot is Australia's signing up to the Glasgow Leaders' Declaration on Forest and Land Use.

Australia refused to join the 190-strong coalition of countries and corporations, led by the UK, pledging to phase out coal power. Australia refused to support various initiatives such as the Global Methane Pledge, the Fossil Fuel Finance Pledge (to stop funding fossil fuel projects via export credit agencies) or even the Green Climate Fund.

If we were to meet our obligations under the Paris Accord, proportional to our wealth, it has been calculated that we should be contributing $4 billion annually to the Green Climate Fund. Instead, ours is the only wealthy nation not contributing to this UN Fund, preferring to give bilateral aid targeting the Pacific and South-East Asia. At COP26 Australia pledged a further $500 million to such bilateral aid, additional to the $1.5 billion already committed.

Whereas other country pavilions were showcasing renewable energy and other decarbonisation initiatives, the Australian Pavilion featured Santos and their proposed publicly-subsidised Carbon Capture and Storage Project, a technology which has for two decades been shown to be both expensive and unsuccessful.

1. All are welcome to join a 30-minute midday meditation any day from no until November 14, during COP26, hosted by the Anglican parish of Queenscliff/Lonsdale in Geelong, Victoria. Participants will be in the church and on Zoom. For those of us with faith in the power of the Divine to heal and transform, the meditation will begin at 12noon AEDT with the ringing of the church bell.

2. This Tuesday (at an awkward time for Australians), join GreenFaith representatives at #COP26 — @merynewarah, @nanafirman, and @NeddyAstudillo — for a brief overview of what's happening in Glasgow. Sign up here: https://t.co/9kW7mQK6lw

3. In consultation with the Interfaith Liaison Committee to the UNFCCC, Bishop Philip Huggins and Ms Sarwat Tasneem invite people of faith everywhere to offer these prayers and silent meditation for a beneficial COP26. Many of us believe such prayers, offered with faith, can be transformative. If this is you, these offerings may help.

3. World Christian Meditation Community invites you to check out WCCM's offerings regarding COP26, available on their website. These include various talks, reflections and prayer and meditation sessions. We hope you find them spiritually helpful. https://wccm.org/outreach-areas/nature-and-the-environment/

How Australia is tracking vs the rest of the world so far at the pivotal UN Climate Change Conference (COP26) in Glasgow. For more details on how these assessments were made, see here. 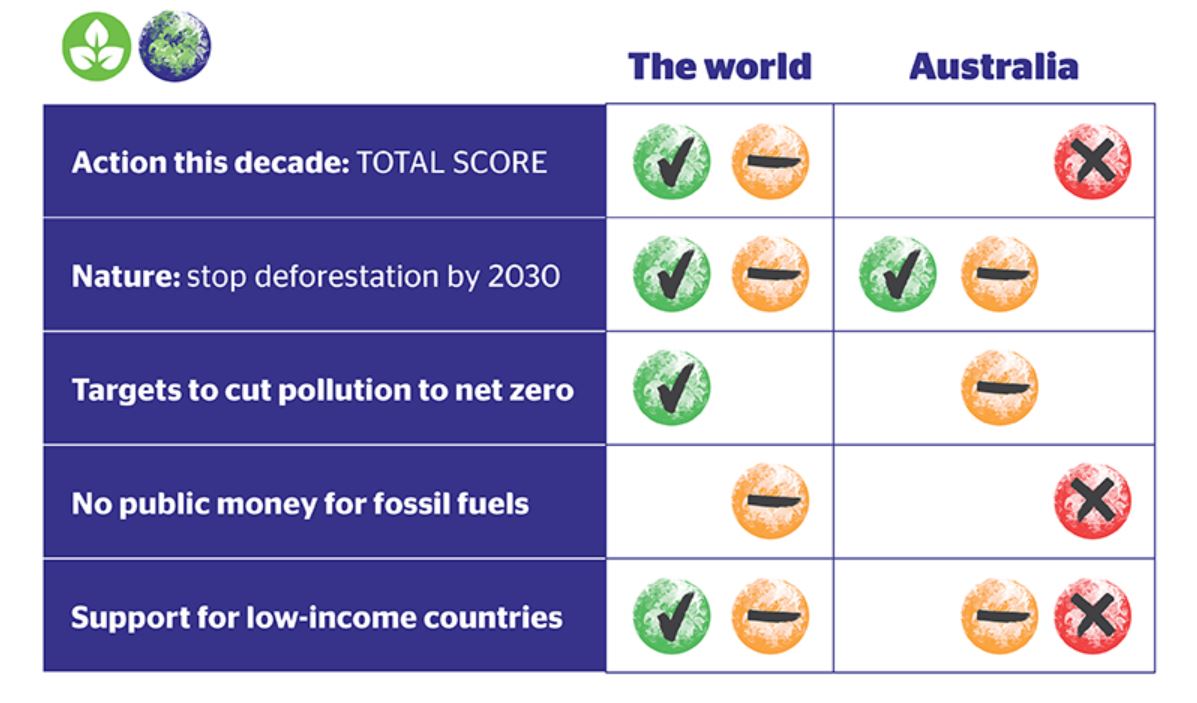