ARRCC is proud to be part of a vibrant, principled and strategic movement which is working to preserve a safer climate for all. We admire the dedication of those many thousands of ordinary, extraordinary Australians who have put time, money and energy into opposing Adani's Carmichael mine and many other profit-oriented projects that are costing the earth.

We are grateful to ARRCC supporters too, who have helped to deliver significant wins this year. Although there is much more work to be done, we have plenty to celebrate.

After many months of campaigning by civil society, including ARRCC, some successes came through in the final month of 2017:

This builds on ARRCC's success, along with others in the climate movement, to persuade Westpac and CommBank to go the way of dozens of other banks and rule out finance for Adani. 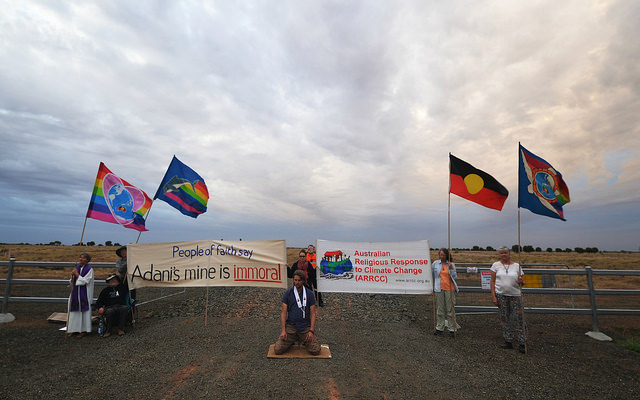 As leaders in our faith communities, we feel compelled to challenge Queensland’s proposal to assist and partner with the Adani Group to develop the Carmichael Mine in the Galilee Basin because of the effect the resulting carbon emissions will have on our climate, our economy, the world’s poor and the environment.

With global warming being a threat to the viability of our agricultural and tourism industries, our marine life, and the wildlife in this beautiful State, it seems unconscionable that any current or future Queensland government would make a development decision that puts all this at risk.

We believe that people of goodwill must work together to reduce greenhouse gas pollution at emergency speed.

Therefore, the development of the mine is unacceptable, as are all forms of government support, direct or indirect, for the mining, transport and shipping of fossil fuels.

We urge both governments to instead invest in renewable energy technology which will create far more employment opportunities than the proposed mine.

We call on you to refuse approval for Northern Australia Infrastructure Funds to be used to build the railway line for the Adani mine.

We plead with you on behalf of our fellow Queenslanders and Australians, for the members of our faith groups, for the millions of vulnerable people on earth, for  future generations who have no say of their own, and for all of creation.

Market Forces has an Adani List, where they showcase all the companies known to be working with Adani. They are encouraging people to tell these companies not to destroy their own reputations as well as the possibility of a safe climate. Among them is AECOM, working now with Adani on the rail line - send them a special message about how appalling this is.