Australia is capable of so much better

It was mid-afternoon on December 31, the last day of the decade, but it was dark with clouds of smoke on the New South Wales south coast, with an eerie red sun peering through them. On the evening before, Samuel McPaul, a 28-year-old fire-fighter whose wife is expecting their first-born child, died while fighting fires. Two other “Firies”, Geoffrey Keaton and Andrew O'Dwyer, died a few days before. We are very sad for their families, but also grateful for their heroism.

Australia is facing a drought and bush-fire emergency so severe that no-one has ever seen anything like it.

Photo per kind courtesy of the ABC.

Places like Bangladesh, Haiti, The Philippines, Kiribati, Tuvalu, Syria and East Africa have been increasingly hit by the impacts of global heating or sea level rise for decades. According to Oxfam, over the past decade, climate-fuelled disasters have forced over 20 million people to flee from their homes each year. In some sense, it's now Australia’s turn. The human suffering is heart-breaking, and many of us dread a future where such suffering will be increasingly the norm.

What gives me hope is the many heroes who are fighting to save lives today, and the many who are working to prevent climate-related catastrophes from happening in the first place. Greta Thunberg is one such person, but there are many thousands of people world-wide who are similarly dedicated. I witness people giving up lucrative careers to combat global heating, and many prepared to volunteer endlessly without immediate reward. Indeed, they are prepared to be ridiculed, maligned in the media, marginalised and/or arrested for the chance of protecting life as we know it.

Greta Thunberg has shown enormous integrity in refusing to travel by air to important international conferences. There are also thousands of Australians who are mindful of their ecological footprint, who are prepared to “walk the talk”. And as people, we are very generous. Australians rank consistently high on the World Giving Index, which tracks the extent to which people helped a stranger, donated money or volunteered time in the last year.

It is true when our Prime Minister says that the climate crisis was not created by Australia alone. Technically, we create just 1.3% of the world’s emissions. However, this obfuscates the fact that, despite the Coalition’s false assurances, our emissions are rising, that we are not meeting our international commitments and that we are known as a “blocker” at United Nations climate negotiations. Our per capita emissions are about the highest in the world; we export around the largest volumes of coal and gas of any country; we have one of the highest rates of tree-clearing among developed countries; in short, Australia is an environmental vandal. As a nation, we are reaping what we have sown, but ordinary Australian people are much better than this.

In the 2019 Climate of the Nation survey, 81% of Australians are concerned that climate change will results in more droughts and flooding; 68% of Australians agree that the Government should plan for an orderly phase-out of coal; 54% believe Australia should act on climate change even if major emitters like the US and China are not doing so. Two million Australian households now have rooftop solar. 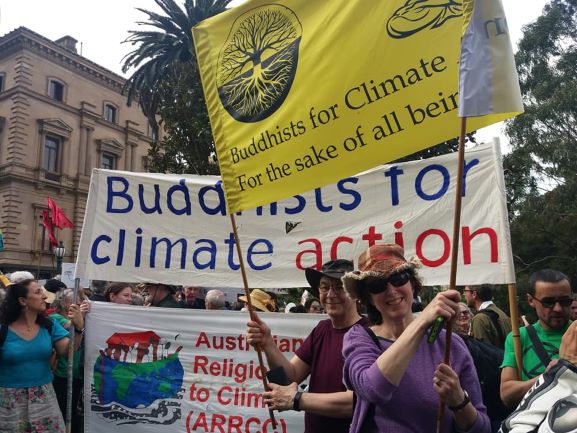 ARRCC is one organisation taking a stand against the direction our National Government has taken. As people of faith, we are proud to stand with the many Australian secular and faith-based organisations who are trying to push governments and businesses to do the right thing. Along with other organisations, we are grateful for increased donations and volunteers' commitment.

ARRCC is currently struggling to see how to hold our position with integrity, yet to speak our truth simply, without being part of a polarisation which is becoming so characteristic of our times.

In the decade starting with 2020, may we and others heal the divisions, and somehow gently persuade Australia’s elected representatives that there is an urgent need to change direction. Ethically and economically, our nation can no longer afford to allow coal, gas and oil interests to hold so much political influence. May our leaders have the courage and humility to reassess their allegiances. Those of us who pray, please pray that the wisdom, generosity and sheer heroism of ordinary Australians help transform our politics, so that our nation can finally show the international climate leadership of which we are capable.