We can be thankful that the international community has now ratified the Paris Accord, even if Australia has been left behind. This milestone was passed earlier than generally expected and in time for the COP22 climate talks in Marrakech, Morocco. If you haven’t yet done so, please add your voice to an interfaith call for various forms of concrete action to urgently reduce global emissions, by signing the petition and joining the social media campaign.

Next GreenFaith/ARRCC meeting: For anyone in Melbourne and surrounds, the discussion at this next gathering will be on “Finding Hope in Climate Change”. Held in Hawthorn, these are informal meetings, including a vegetarian meal. 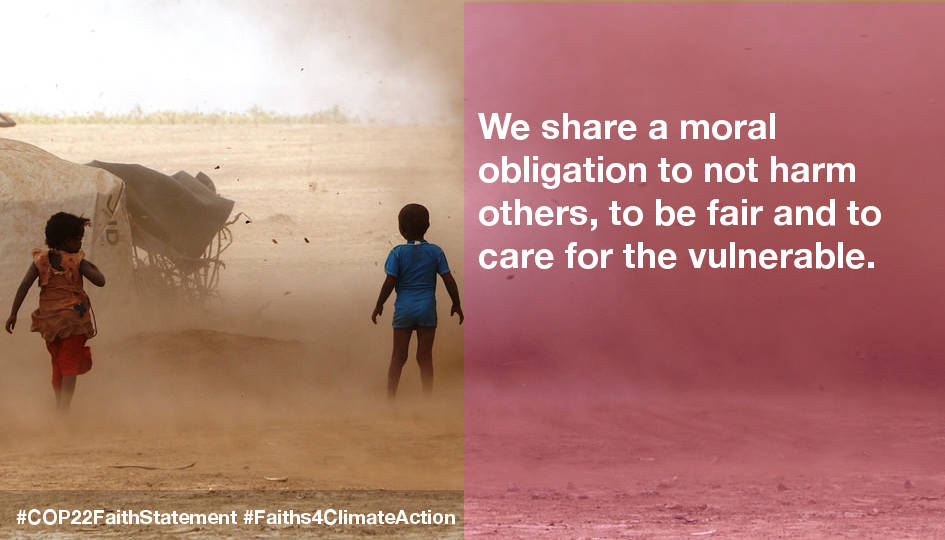 On a lighter note, our young, energetic Eat Less Meat group continue to post on their lively Facebook site, www.facebook.com/mfwelm. Worth checking out, especially if you like some useful recipes.

Our secular partner organisation, Less Meat = Less Heat, are launching their app called the “Climatarian Challenge app” on Saturday November 12th at a picnic on the banks of the Yarra. The event is on the ARRCC Facebook page here. See this short video clip which explains the app: https://www.youtube.com/watch?v=HsDwHLT_ER0

The academics and ethicists among us will be interested to read the carefully considered argument in David L. Clough’s paper: Consuming Animal Creatures: the Christian Ethics of Eating Animals.

A most enjoyable evening was had by all who attended “Music for a Warming World” at the Doncaster Playhouse, organised by Grand Stand for the Environment. ARRCC supporter, Abe Schwartz, is hosting a radio programme featuring the artists on the evening of Sunday, 13th November, Melbourne-time 9-10pm, world-wide live streaming on www.j-air.com.au or radio 87.8FM in S.E. Melbourne.

Details are not yet available but, readers in Catholic organisations, please be advised that the Global Catholic Climate Movement is organising a conference on fossil fuel divestment. It will be held in Rome on January 27th. Those attending can expect to receive great input from the experts.

Olivia Kinnear is a PhD student at Deakin University, and a climate activist with 350.org. She is researching ‘spiritual politics’ and will be including a case study on ARRCC in her thesis.  Olivia defines ‘spiritual politics’ as a deep and rigorous engagement with spirituality as a source of political theory and action. She would like to explore with individual supporters how they engage in both spirituality and progressive politics. An interview would take around one hour, give or take.

In the year since the Paris agreement Australia has not passed its commitments at Paris through our parliament, so is not ready to ratify. Given the lack of activity in recent times, China and America have been writing to the Australian government asking what actions we will be taking.

It seems that Australia will clumsily limp forward with Hazelwood, Australia's dirtiest coal-fired power station, set to close and no just and orderly transition plan for the affected community. The Federal Government has been unresponsive to the fact that renewable energy has already provided 14,000 jobs across Australia and can provide many more. If we are concerned about jobs, then there is all the more reason to move towards renewable energy.

This is proving to be a tough gig, everyone, but let us never give up!