Since we launched the “Meat-Free Day” multi-faith campaign jointly with the Hindu Council of Australia on 2 October 2008 a lot of awareness about this issue has been built up in the Australian community. In recent years a number of similar initiatives have been launched, for example: the “Meat-Free Mondays”, the “Meatless Mondays” and the “Meat-Free Week”. We have co-operated with the organisers of these campaigns and have participated in a number of their events.

There has also been marked change in the consumption pattern of meat in Australia away from red-meat towards white-meat and a very slight drop in total consumption as per the following statistics:

This is a good trend from the health point of view as there are a higher percentage of cancer sufferers amongst the red-meat eaters. It is comparatively better from the environmental considerations as well due to lesser methane emission.

Our Uncashed Dividend – the health benefits of climate action

A report was jointly published by the Climate and Health Alliance and the Climate Institute on this topic. This report highlighted the health benefits of taking action on climate change issues and thus making a saving of some Billions of dollars on the health budget. For example: moderating our consumption of meat and dairy products will lower the incidence of obesity, ischaemic heart disease and stroke, while cutting consumption of processed meat will reduce the incidence of colorectal cancers.

The direct health costs of obesity alone to the Australia community are estimated to be more than $8 billion a year. The overall cost to Australian society and governments of lost wellbeing associated of obesity is estimated at more than $58 billion a year. So we can imagine the health costs due to heart disease, diabetes and cancers would amount to hundreds of billions of dollars per year. There is a huge potential for saving on health budget by looking after our diet.

Late last year we obtained a grant of $5000 from the Parramatta Council to conduct Vegetarian Cooking Workshops to promote this issue. The following workshops were partly funded by that grant and were conducted by the ARRCC Cooking Demonstrator Ling Halbert:

In these workshops we made an informed presentation on the topic of sustainable food choices to the participants emphasing why it is good to eat a balanced diet rich in fresh fruits and vegetables for own health and the environmental considerations. The participants were asked to fill-in a questionnaire to do an audit of how their own food intake in the previous week had fared on the individual environmental footprint basis. The meal prepared was then shared by all the participants. The participants were also provided with a printed copy of the Recipe Booklet. These booklets are available on ARRCC website for downloading.

A breakup sessions talk was presented by Vijai Singhal to a group of attendees on the topic of  “Faith in Food” at the “Achieving Peace with Justice” Forum organized by the NSW Ecumenical Society on 29 August 2014 at the Santa Sabina College, Strathfield, NSW. This generated a considerable interest amongst the high school students who attended that session.

Vijai Singhal was interviewed by Ms Tasmin Dilworth, a Macquarie University graduate research scholar. The topic for the research project was:  Bringing Justice to the Table- Investigating how issues of food justice are implicated in ethical food behaviours in Australia.

We've also updated our Eat Less Meat resources, which we are pleased to share with you - and hope that you will share them with your family, friends and community. Print out a few copies of our brochure, or email a copy of the flyer to raise awareness of ARRCC's Eat Less Meat campaign. We also have a brochure outlining how your community can host an Eat Less Meat cooking workshop! 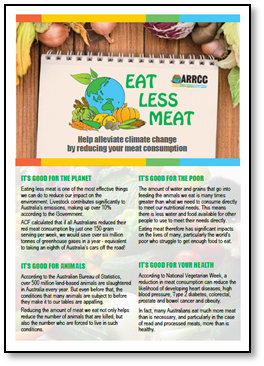