The agreement reached in Paris depends on political will, with countries setting their own climate action plans. So this is not a time to be complacent. If the decisions are to be implemented, the world will need to pick up the pace of change dramatically, and Australia will have to change quite markedly from the course it is on. 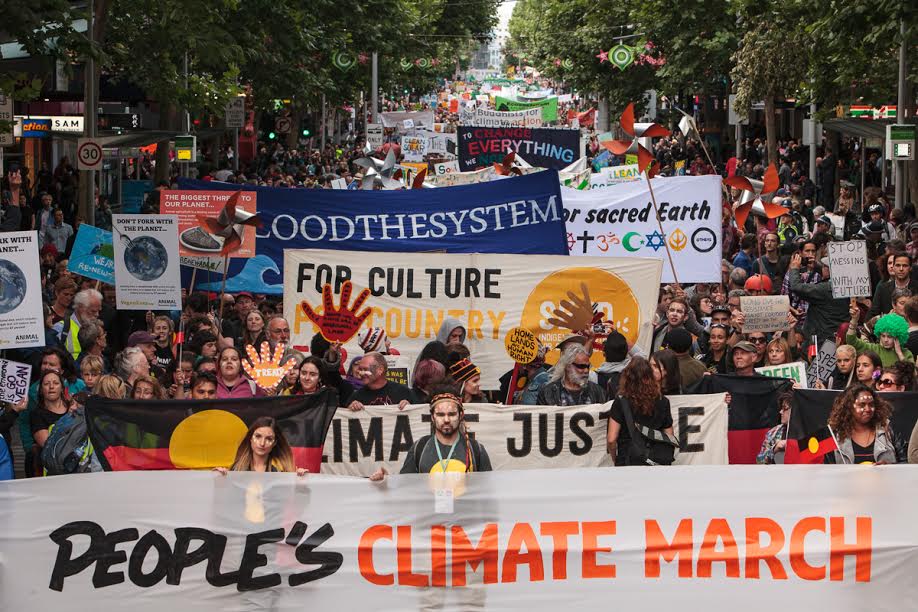 The United Nations talks in Paris are over and governments from around the world have committed for the first time to a universal agreement to cut greenhouse gas emissions and to avoid the most dangerous effects of climate change.

20 years of meetings have resulted in negotiators from nearly 200 countries signing on to a deal that set ambitious goals to limit temperature rise and hold governments to account for reaching those targets.

Six years after the chaotic collapse of the Copenhagen climate summit, the agreement now known as the Paris Outcome for the first time commits rich countries, rising economies and some of the poorest countries to work together to fight climate change.

Under the deal, adopted by consensus, all countries agreed to reduce emissions. Government and business leaders said the agreement, which set a new goal to reach net zero emissions in the second half of the century, sent a powerful signal to global markets, hastening the transition away from fossil fuels and to a clean energy economy.

Wealthy countries agreed to raise $100bn (£66bn, A$1.38bn) per year by 2020 to help poor countries transform their economies. The overall agreement is legally binding, but some elements are not. The latter include the pledges to curb emissions by individual countries and the climate finance elements.

The agreement reached in Paris depends on political will, with countries setting their own climate action plans. So this is not a time to be complacent or possibly even optimistic. The world will need to pick up the pace of change dramatically, as Bill McKibben so aptly describes in his article in The Guardian, “Climate deal: The pistol has fired, so why aren’t we running?”

The deal set a goal to limit warming below 2C and strive to keep temperatures at 1.5C above pre-industrial levels. This was a far more ambitious target than expected, and a key demand of vulnerable countries.

It incorporates previous commitments from 186 countries to reduce emissions, which on their own would only hold warming to between 2.7C and 3C. The UN’s climate science panel says net zero emissions must happen by 2070 to avoid dangerous warming.

That is why the text has a review mechanism to ramp up those pledges every five years, in order to make them strong enough to keep under 2C. It sets out procedures for review at regular intervals to deepen emissions cuts, with countries aiming for global greenhouse gas emissions to reach a peak as soon as possible, and then rapidly scale down in the second half of this century. The first stock-take will happen in 2018, but the first one under the deal happens in 2023.

For vulnerable countries, particularly low-lying countries and islands, the high ambition of the 1.5C goal was offset by the weakening of the agreement when it came to dealing with irreparable damage of climate change.

Finance to help developing countries adapt to climate change and transition to clean energy was pledged at the 2010 climate talks in Cancun at $100bn (£66bn) a year. By 2025 the draft agreement undertakes to improve on that. However, the commitment was offered as a non-binding decision that accompanied the binding text.

How did Australia do?

The environment minister Greg Hunt and Foreign Affairs Minister, Julie Bishop, have put a very positive spin on the outcome of the talks as allowing Australia the flexibility to do more to curb climate change. But Coalition backbenchers have been dismissive of the achievements in Paris. Malcolm Turnbull faces a political balancing act if he moves towards a more ambitious climate policy while containing any revolt by the conservatives and climate sceptics in the party. Currently Coalition policies include (a) sticking with the Direct Action Plan and (b) the relatively low target of reducing Australia’s greenhouse emissions between 26-28% below 2005 levels by 2030. But the Turnbull Government has left the door open to considering changes in coming years, including a scheduled review of domestic policies in 2017.

Minister Hunt has been careful to avoid talking about any changes to subsidies for the coal industry or diesel fuel, instead talking about a gradual transition to renewables over decades. He sets his hopes for achieving the Government’s targets on a suite of methods which have been seriously questioned by most reputable analysts. They generally agree Coalition policies will not be sufficient to drive down emissions within the urgent timeframe that we have to act.

Commentary from other environmental NGO’s

Solar Citizens: “You’ve almost got to pinch yourself. Australia is now party to a legally binding global agreement including a long-term goal of net zero emissions. If our leaders take this seriously it should mean a transition to a clean, safe sun-powered future - starting now!

Hot on the heels of this historic agreement, PM Turnbull has lifted ex-PM Abbott's spiteful ban on the Clean Energy Finance Corporation (CEFC) investing in small-scale solar and restoring its mandate to invest in large-scale solar, rooftop solar and battery storage. Despite this, it remains Coalition Policy to abolish the CEFC entirely, not to mention we still don’t have a strong renewable energy goal.”

To help keep the pressure up, Solar Citizens has thousands of petition postcards calling on Prime Minister Turnbull to commit a sun powered, renewable energy future. You can order 20, 60 - 500 postcards at http://www.standupforsolar.org.au/postcards.

The Australian Conservation Foundation: “The Paris Agreement is not perfect but it’s a huge step forward. … Australia talked big in Paris but their rhetoric is far from the reality back home. The Turnbull Government has just approved one of the biggest coal mines in the world – Adani’s Carmichael Coal Mine. If it goes ahead, pollution from that single mine would almost entirely wipe out Australia’s pollution reduction commitments in Paris.

Our pollution targets were ranked amongst the worst in the industrialised world and put us on track for a world that is 3-4 degrees hotter.

And Prime Minister Turnbull has made no new contribution to climate finance, instead re-gifting funds from an already diminished international aid budget.”

Greenpeace: “The emissions targets outlined in this agreement are simply not big enough to get us to where we need to be.

What do we do now?

After the celebrations have died down and world representatives return to their countries to start the hard work of putting the pledges into practice, there must not be any back-sliding to complacency. Governments should not be allowed to slack on the momentum that COP21 has created.

Our role is to keep the conversation going within our faith communities, to keep people informed about the progress being made in mitigating climate change, and about the need to keep lobbying our government to put in place more ambitious policies. The Australian Government must do much more than have low pledges, inadequate means with which to meet them and, at the same time, actively favour the coal and gas industries.

Australia should do as it has signed up for and put itself on a trajectory consistent with limiting the rise in global temperatures to under 1.5 degrees C above pre-industrialised levels. As people of faith, we have an obligation to protect this earth and the vulnerable peoples that are already feeling the effects of climate change. We need to work within our communities to spread the word and to speak with one voice in defence of our earthly home.

The Guardian, Bill McKibben, “Climate deal: The pistol has fired, so why aren’t we running?” 14 December 2015: