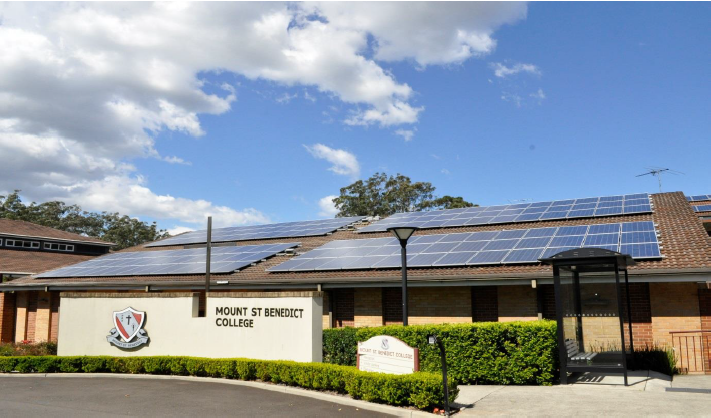 2013 was designated the 'Year of Stewardship' at the College, with particular focus on ways to be good environmental stewards. Part of this initiative was becoming only the second school in Australia to invest in a huge 100kW solar system and the only school to self-fund such a large project.

Through 384 solar panels across four roofs, the system will generate an estimated 145,000 kilowatt-hours (kWh) of power annually – 22% of the College’s total electricity usage and enough to power 18 average homes. In addition to significantly reducing power costs it will reduce the carbon footprint by approximately 155,000 tons of CO2-equivalent.

“The electricity generated will be able to be utilised most efficiently at times of high power usage at the College, for example, on very hot days when air-conditioning units are in use. This reduces the need for peak power and in turn lowers the school’s power bill, which in turn will enable this extensive collection of solar panels to be paid off in less than five years’ time.”’

“Mount St Benedict College has now become a community leader for renewable technology and environmental conservation. This investment in sustainable energy alone will reduce the school’s carbon footprint by 155,000 tonnes of CO2 equivalent.  This initiative has really allowed Bennies to demonstrate its ability to be good stewards of the environment”.

“I’m really glad that as I graduate from the College, we’ve taken such a giant step forward.  I really hope others will join us – if we had a 50km by 50km solar field in Australia, it would enable Australia to have 100% renewable energy”.

The Bennies intention to go solar dates from 2011, with the budget for the project allocated in March 2012. With the lower costs of solar and rapidly increasing electricity costs, a project of this size make both environmental and economic sense.

At the start of this program, the understorey was tangle of privet and other noxious weeds, preventing germination of new blue gum seedlings, which left alone would eventually result in the death of the forest. Through the funding allocated, Abel Ecology were employed to restore the area. Now gum trees more than 5 metres tall stand in forests once choked with weeds. In time, birds and other native species will return.

There is too much negative talk about climate change and the need to protect our environment today, it’s easy for some to dismiss it as either not relevant, (just a great big hoax) or just too big and too difficult a problem to understand or do anything about. They key is understanding what you can do, no matter how large or small, to make a difference. Understanding the intrinsic value of our earth and our duty and responsibility to protect it is vital. Leading by example and instilling this vision in our young people is crucial.

The Bennies are setting a fine example. Again to quote Principal Mrs. Maria Pearson “An extraordinary school requires extraordinary vision, one that not only pursues academic excellence, but embraces all that makes people fully alive to themselves, to each other, and to God.” Such is the vision of this vibrant and innovative school.