Tell Mr Shorten it's time to make an ethical choice

Adani has announced that it has the funding to go ahead. For a long time, the Federal Opposition Leader, Bill Shorten has sat on the fence on this issue. Now he needs to make a clear ethical choice.

To compound matters, on November 22, Mr Shorten, stated publicly that Australia’s emissions would be “unaffected” if Adani’s coal were to be burned overseas.[1] Please let Mr Shorten know that this is ethically unsound, and has destructive implications for the earth.

You can edit and send our template letter to Mr Shorten and it will be cc'd to your local MP if s/he is Labor. If not, the letter goes simply to Mr Shorten. 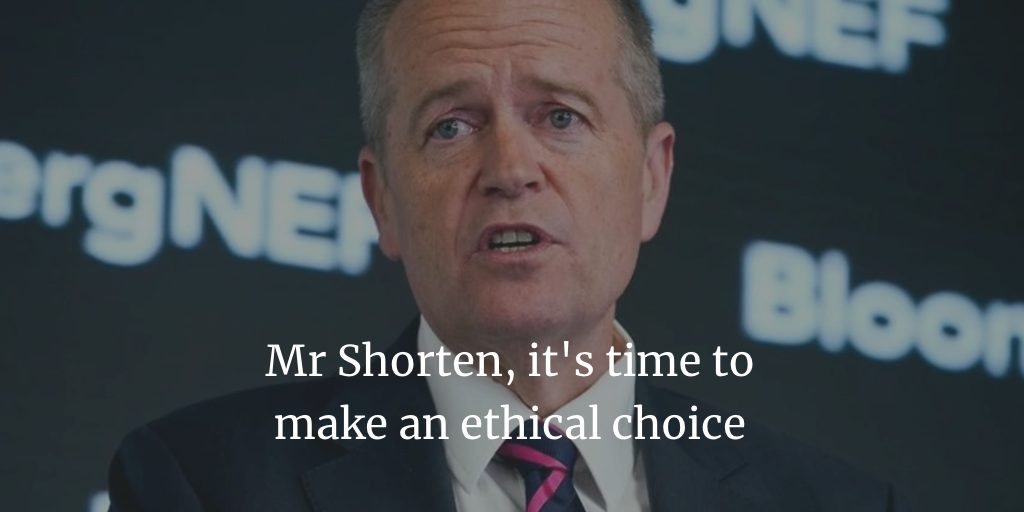 Adani has announced that it has the finance to start work before Christmas. For some time you have been saying that Labor will support the mine "if it stacks up". It clearly does not from a moral point of view. Much of Queensland is literally on fire. There is drought across most of the state as well as all of New South Wales. Thousands of children are going on strike to protest for urgent climate action.

ARRCC is also ethically opposed to Mr Shorten's recent statement that Australia’s emissions would be “unaffected” if Adani’s coal were to be burned overseas.

It is true that UN protocols say that CO2 emissions should be counted against the country where the coal is burnt rather than where it is mined. Yet this is a mere accounting technicality and the world currently faces a climate emergency. It is widely understood that the Paris Accord is entirely inadequate to the task of addressing the current climate crisis. Much bolder action is urgently needed, not finding loopholes out of action through carbon accounting rules at the UN.

Australia's CO2 emissions from exports are twice as big as our whole domestic economy. As one of the biggest exporters of coal in the world, we can't simply absolve ourselves of responsibility like this.

This is all the more serious because so much is at stake: no less that the ecosystems on which all life depends. To continue assisting with humanity’s dependence on coal as an energy source is no longer morally acceptable. So is trying to sit this one out, by trying to remain neutral and waiting to see whether the mine “stacks up.”

Various statements by religious leaders have urged humanity to shift its dependence from coal. In Laudato Si’, Pope Francis states, “We know that technology based on the use of highly polluting fossil fuels – especially coal, but also oil and, to a lesser degree, gas – has to be progressively replaced without delay” (paragraph 165).

On November 5, 2015, the Australian Federation of Buddhist Councils wrote, “The leadership of every nation of the world is needed now more than ever to help transition the world from coal power to renewable clean energy.”

While Adani’s coal and rail project are the focus on current attention, ARRCC is opposed to all new coal development in the Galilee Basin and elsewhere. Australia gains materially from the benefits from coal exports through royalties, jobs, shareholder profits and so on. We are therefore profiting from a destructive industry, no less than a drug pusher profits from the destructive impacts of addiction on his customers. This position is unacceptable.

ARRCC calls on the Australian Labor Party to take a stand for the future of life on earth. We are already witnessing more extreme weather events, rising sea levels and the bleaching of the Great Barrier Reef. Australia cannot wash our hands of the responsibility for what our coal does overseas.

It is time for political leadership. A political party in government at a federal level could create new legislation, as the Hawke Government did to protect the Franklin River. They could pass new legislation banning coal mining and exploration in listed areas, eg, the Galilee Basin. Or it could amend the EPBC Act to allow the Environment Minister to prohibit coal mining in such areas.

Likewise, Labor could pledge to revoke Adani’s environmental approval under the EPBC Act. Legal advice provided to Australian Conservation Foundation shows that the Environment Minister has the power to do this if he or she believes that there will be a significant impact on the environment that was not identified in the original assessment process.

Finally, Labor could commit to applying export licences, as the Federal Government did during the 1970s when it banned the export of sand mined on Fraser Island. The Minister could issue regulations prohibiting the export of coal mined in the Galilee Basin.

Working for Justice in a Warming World