At first, I scoffed, thinking “sucks to be old!” Then, my rational brain did the math - I would be one of those old people! The emotions that followed rolled deep within me. Climate change was about me! Until then, the climate crisis’ effects on animals, shorelines and island nations in the Pacific had been painfully obvious, but now the reality that climate change could hurt me sank in for the first time.

As those of us lucky enough to have houses settle in for a minimum long three months of lockdown, that same kind of realisation is starting to hit home. This is no longer about people in Wuhan or the Lombardy region. This is us, as a family or share house, or alone, being locked in for a large part of this year. With each passing day, the reality of what this feels like becomes much different to the news stories we were watching in January.

For most of us, there’s more time to pause and reflect. There’s a new solidarity with other everyday Australians who are also in this crisis. We are indeed all in this together. Quite likely, the reality of the word  “crisis” will mean more from this point: from First Nation’s families grieving for loved ones who have died in custody, to people in Bangladesh and the Pacific Islands dealing with losing their homes through sea level rise.   Like the possibility of me dying of heatstroke in the coming decades, we are not disconnected from these realities.

I regard spirituality as the aspect of ourselves where we learn that we are connected intimately to the world around us. The economic system in which we participate plays on our illusion that we are separate from Earth and from one another; that we can consume as much as we want, fly and spend whatever we like; spend long hours and jobs that destroy our sense of connection without paying a price.

Now that this tiny virus has exposed that delusion, as we settle into what isolation really feels like, we need to remember how important solidarity is. Whether that’s keeping ourselves at home to save people from dying in this pandemic or changing our lives to help the world avoid the worst of the climate crisis. 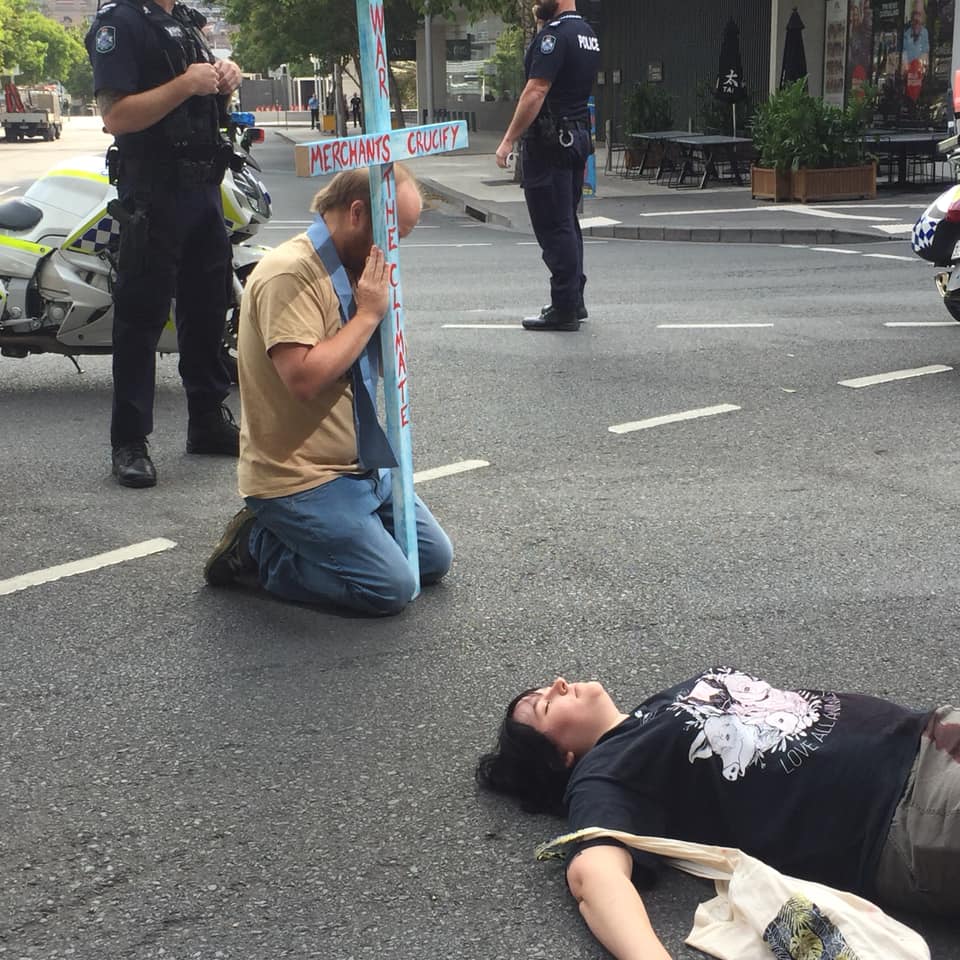 As a community, coming out of this pandemic, we face some very challenging times. We will need to regain the power that  governments have taken to control the spread of this disease, and which has led to some questionable use of police powers.

The sense that the climate crisis would affect me, along with a spiritual growth that led me to see that I am connected to what was happening to vulnerable people everywhere, has ultimately led me into participate in non-violent direct action.

In 2012, 2013 and 2014 I was arrested several times protesting Australia’s wars in Afghanistan, Iraq and elsewhere. While there was very little attention given to our arrests, much less was given to the victims of these wars, including the brutal war crimes of Australia’s SAS in Afghanistan.

People innocently suffering and dying at the hands of our economic and military systems affects us all in deep mental, emotional and spiritual ways.

I’ve since been arrested in the cause of climate justice. As we saw in the 2019 bush-fires, and as we will see again in coming food shortages, the climate crisis is not in fact a faraway news story. It is about you and your family too.

After this pandemic passes, governments and businesses may well pressure us to return to the competitive, self-interested economy of the past. There’s a clear risk that now-enhanced police powers will be used to stop protests against the call to return to the old normal. A normal that was driving our climate over the edge.

A new normal could be built instead, one which is based on loving our neighbour and a commitment to promoting the long-term flourishing of life on earth. It will mean resisting powerful forces and working in solidarity with all who are hungry for a better world.

If we retain the sense that we are all in this together, if we play our part and are willing to make personal sacrifices, we may still be able to prevent the worst kind of crisis our human world has ever faced.

Author, Greg Rolles, is a Quaker, a school teacher, an adult educator in nonviolence and an activist.