That faith communities are leading the way in sustainability became evident at a formal Awards Dinner celebrating World Environment Day on 5th June.

That faith communities are leading the way in sustainability became evident at a formal Awards Dinner celebrating World Environment Day on 5th June. 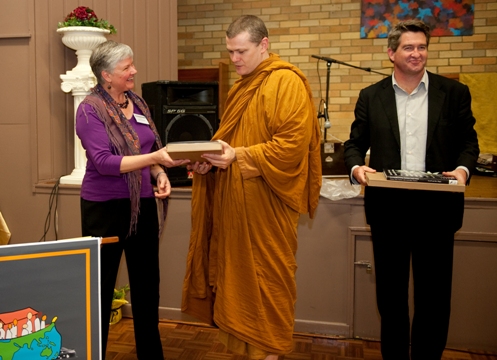 The vegetarian dinner was organised by multi-faith network the Australian Religious Response to Climate Change (ARRCC) and held at the Anglican Church in South Hurstville Sydney.

One of two keynote speakers for the evening, CEO of The Climate Institute John Connor, emphasised the importance of interfaith cooperation on climate change.  “Global ambition to act on climate change is fragile, but is moving forward in most countries.  We urgently need greater cooperation across faiths, between religious and secular groups, across countries, and between rich and poor if we are to speed the journey to a less polluting and wasteful world”, said Mr Connor.

Bhante Sujato of Santi Forest Monastery and the Federation of Australian Buddhist Councils shared his thoughts with the gathering about the significant contribution of religions in this journey.  “We don’t only need changes in our technologies”, he said.  “We also need to change how much we consume.  While there are people across the world who don’t have adequate shelter or enough to eat, many of us consume far more than we need.  Yet provision for our physical needs, caring relationships, and meaning in our lives are all that we need to be happy.  Religions have a particular contribution in providing this meaning.”

For outstanding effort in championing the link between spirituality and ecology, the Faith and Ecology Network received the “Spirituality and Ecology Award”.  The “Community Connections Award” was won by al-Ghazzali Centre for Islamic Sciences and Human Development, for its excellence in partnering with the local community on its Cooks River regeneration project.

The Eco-Champion Award for individuals was jointly won by Rev Bob Thomas, who was instrumental in the bottled water-free Bundy-on-Tap initiative, and Deepanjali Gupta, co-founder of the Indian Youth Climate Network.  There were also joint winners of the “ARRCC Climate Change Award” – Caloundra Uniting Church, which installed solar panels in the shape of a cross, and the Anglican Church Diocese of Canberra/Goulburn for climate change leadership across multiple parishes.