Be under no mistake all the money in the Emission Reduction Fund comes from our taxes. And now Energy and Emissions Reduction Minister Angus Taylor wants to give our biggest polluters [1] (who pay little or no tax on their multi-billion dollar profits) a further billion dollars to research carbon sequestration.[2]

Over the 15 years of the ‘clean coal’ propaganda, there are only 13 coal-fired power stations across the world that use sequestration technology; none are profitable; they all require massive subsidies.[3]

It is the equity, the fairness, the morality of the situation that makes me very angry. Why are we, the little person asked to do the heavy lifting? Why are we, who can least afford it, paying for their pollution? Why are our taxes being used to subsidize companies who avoid paying their share of tax?

The state and federal governments listened to the medical and scientific experts, and it has helped control the Covid pandemic.

The scientists advised the Bushfire Royal Commission that the primary cause of our recent bush fire catastrophe was climate change. They warn that if we fail to act on climate change, such conditions will occur more often and with greater ferocity in the future.[5]

And science also provides us with alternatives for energy. They are smarter, cheaper, less polluting, use less of our precious water and, dollar-for-dollar, would create many more jobs than coal mining.

Yes, regional communities need jobs. Yet they are not served by the propping up of old, declining industries. More and more investors are walking away from coal and gas because they have lost their social licence.

Minister Taylor, Sky News, The Australia and the Telegraph (Murdoch Press) will tell us it’s making jobs, reducing emissions, strengthening the economy, and there’s even a spot for renewable energy. Don’t be fooled. Follow the money: the people who stand to gain the most from Minister Taylor’s plans are fossil fuel companies. 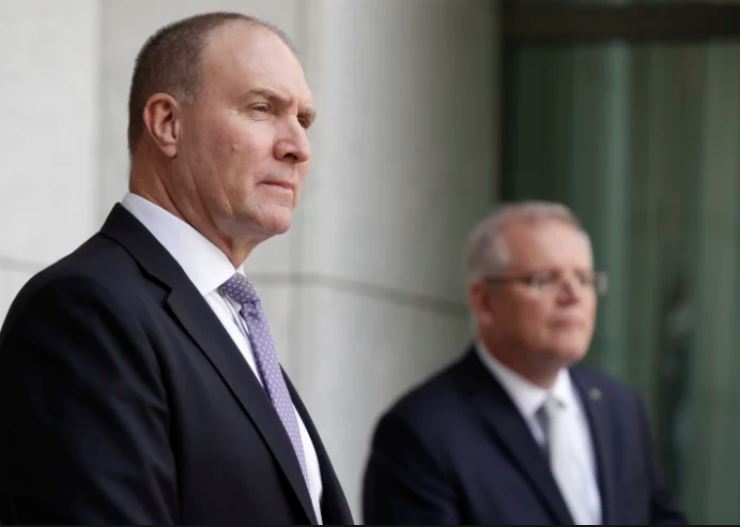 Neville Power, head of the Covid Commission, and the Prime Minister at a press conference. Photo credit: Alex Ellinghausen at the SMH.

The gas industry have wrongly but successfully convinced Minister Taylor that gas is a ‘transition fuel’. Because of fugitive emissions at various stages, and the much higher destructiveness of methane in the atmosphere, in fact it’s much more polluting than coal. [6] Exporting Liquified Natural Gas (LNG) is even more carbon intensive because the gas has to be cooled to -162°C. The gas industry has a lot riding on this because Australia is the largest exporter of LNG.

Will you write to your local Member of Parliament about this? It’s easy to find their contact details here: https://www.aph.gov.au/About_Parliament/House_of_Representatives

If you want a better future for your kids, don’t settle for government spin. Demand that post-Covid stimulus money is invested in industries that create jobs protect the climate and create a fairer, more resilient economy.

If the coal companies want to spend some of their billion-dollar profits on creating clean coal – let them. It’s their future which is at stake, not ours.

1. Belgium, Sweden and Austria, nations with much colder climates than ours, have now closed all their coal-fired power stations.

2. The Adani coal mine will pay no tax. It will, like most mines, have a high level of automation - employing less than 1500 people.[7] It’s also not a mine but a quarry, they scrap of the vegetation and topsoil and dig a big hole, it’s like an ulcer on the landscape.

3. The Government-sponsored independent energy review the ‘King Review’ was chaired by a former fossil fuel business executive.[8] This review wants to redirect billions originally intended for renewables. (I wonder why the energy review wasn’t headed up by a scientist!)

4. No major political party is without blame for Australian’s lack of real progress on CO2 pollution. Labor’s first plan to put a price on carbon was adequate but was voted down by the Greens.

6. Quarrying for coal and using some of that coal to produce our electricity contribute about 50% of Australians total CO2 emissions, transport contributes a further 19%.[9] Burning natural gas is 50% cleaner than burning coal and would make a cheaper bridging alternative than very expensive sequestration technology as we move to clean energy.[10]

7. There is nothing Christian about denying the science of global warming – the argument is over ideology, not theology or science.

8. Unlike some world leaders who just make up stories, I have given you the references so that you can ‘fact check’ the information for yourself.

As an aside: I note that Trump can still write his fantasy stories on Twitter. He’s free to write what he likes but it may come with a classification that his twitter is fiction not fact.

Rev. John Buchanan is a Minister of the Word in the Presbyterian Church, and an ARRCC supporter.

If you’d like to make a positive contribution but don’t have much time, there’s a ready-made ARRCC sign-and-send letter to your local MP here but I encourage you to use your own words. The letter under “option two” can be edited: https://www.arrcc.org.au/move_money