People of Faith say Aurizon on the wrong track

On Friday, ten people of faith peacefully protested against rail company Aurizon's lack of transparency in their coal hauling operations.

“I’m here today because I can’t sit back while the future of my little boy is at risk” said Erin Kennedy, a Catholic, artist, teacher and mother from Logan.

She and nine other members of the faith-based group Faith in Climate Action blockaded Aurizon’s corporate headquarters in Fortitude Valley on Friday by kneeling in prayer outside the doors.

The group was calling on Aurizon management to be more transparent about the climate-change-causing emissions from the thermal coal they haul in their multi million dollar business. 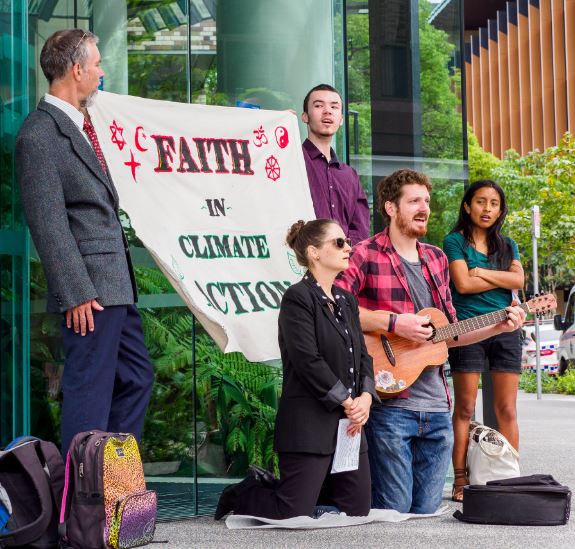 "Aurizon acknowledges the coal it hauls contributes to greenhouse gas emissions. However, Aurizon’s recently released ‘Climate Strategy & Action Plan’ focuses almost entirely on its 1 million tonnes of emissions directly connected with its own operations such as running its locomotives (known as Scope 1 and 2 emissions). However, the report is virtually silent on the 250 million tonnes of emissions released when the thermal coal they haul is ultimately burnt (known as Scope 3 emissions),” said spokesperson and Christian, Mark Delaney 53 of Fairfield.

“We’ve had talks with Aurizon management, and while they acknowledge the emissions, they say they are not legally required to report on Scope 3 emissions, so won’t do so. Other companies like BHP are doing this already, so why can’t Aurizon?”, said Mr Delaney.

The group allowed employees of another company, based in the same building, to go to work as usual.

“Our gripe is with Aurizon only,” said Quaker Jason MacLeod of Inala. “We don’t want to inconvenience other workers, just make our point to Aurizon.”

“If you’re a person of faith concerned for the climate, please come and stand with us for our next protest.” said Mr MacLeod.

“I don’t like confrontation,” said Mr Delaney, who has lived and worked with the poor in India for almost 20 years and seen first-hand the impacts of climate change on the poor. “But I realise that, as a privileged person of faith, I have a responsibility to use my privilege to try to limit the climate change-induced suffering of the poor around the world. They are already facing unbearable temperatures, sea-level rise and more difficult farming conditions.”

Mr Delaney, Mr MacLeod and one other protester were arrested and taken to the Brisbane watch-house where they were later released on bail.