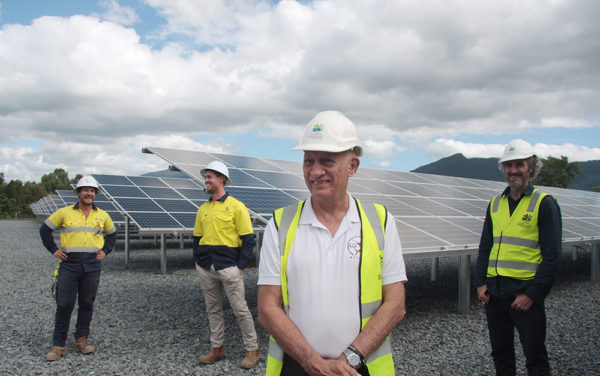 The mini solar farms will generate an estimated 2.92 gigawatt hours of energy each year, which will provide 25 per cent of the total energy requirements of the wastewater treatment plants and feed some power back into the grid.

“The solar farms will reduce Council’s overall emissions by an additional 7 per cent, and increase our solar capacity to 2784 kilowatts,” Cr Manning said.

“This is a significant project, especially when you consider that once complete there will be a total of 4200 panels installed across five sites; the average house has 20-30 panels on its roof.”

Installation is close to completion at the Marlin Coast WWTP, where 756 ground-mounted panels have been installed, and work has started on one of larger solar farms, the Northern WWTP in Aeroglen, where 1484 panels will be installed.

The remaining works at the Southern WWTP (1,484 ground mounted panels), Edmonton WWTP (combination of 392 ground and roof panels) and Gordonvale WWTP (84 roof panels), are expected to be completed in July.

The systems have been designed around existing infrastructure and use bifacial solar panels made entirely of glass for longevity.

Mr Naismith said this system maximises solar production through converting the sun’s rays and reflections to electricity across both sides of the panel.

“Cairns Regional Council’s solar initiatives are an outstanding example of reducing costs and reducing emissions while utilising redundant space such as rooftops and reclaimed land,” he said.