I moved to Port Augusta in 2011, in the midst of interesting times for the ‘Crossroads of the Outback’. At the time, the horizon was dominated by the two adjoining coal power stations: Northern and Playford. The owner, Alinta, was the main employer in town, providing hundreds of steady, direct jobs, as well as indirect employment through the coal mining and delivery. The energy generated supplied a large part of the total output for South Australia. For this working-class community, those power stations were a source of identity and financial means of survival.

But all that was about to change, and it became a town of transition. Not everyone was comfortable living with coal power stations in the back yard. Operating since 1954, the dust and emissions meant poor air quality in the town, especially in the early years. Plenty of town folk had stories of illnesses or health complaints, which seemed to have been linked to these conditions. Our backyard literally did provide a view of the stations, and one of the Sisters who lived there for 7 years had skin irritations that whole time.

Another one affected was the family of the mayor, Joy Baluch. She was a larger-than-life character who was outspoken in her defence of the town and its people. Fifteen years earlier, she had lost her husband to cancer, which she attributed to his work in the power station. So she became the most prominent advocate for what some environmental movements were calling for: a solar thermal plant, a new source of clean energy. At the same time, the power stations were towards their use-by date and more people were becoming aware of their environmental impact.

In my second year there, a local group was formed, called Repower Port Augusta. Its aim was to replace the aging coal plant with renewable technology instead, providing jobs and healthy living conditions for the people of the community. With the reality that the coal plants would not last forever, they carried out a local community vote, to decide whether to replace them with solar thermal or another fossil fuel: gas. With such a small population, I was impressed to learn that 4,000 people had voted, and 98% wanted solar.

This was when I started to get involved. From my Catholic Christian faith perspective, I knew that we were given this land by God, and like God, were asked to care for it and protect it. Not only that, our Popes had been calling us to an ‘ecological conversion’ and to work with governments to create better living conditions for future generations of all of God’s creation. Seeing how much it meant to the people of Port Augusta, it was a clear invitation to help this happen right there and then.

So I participated in a walk that brought together Repower locals and national environmental movements to draw attention to the campaign. In October 2012, about 80 people walked for 2 weeks the 322 kms from Port Augusta to Adelaide. I joined the walk for the first couple of days, listening to speeches from Joy Baluch and an inspiring power station worker, Gary Rowbottom. While he depended on the station for his income, Gary had seen that coal could not provide a long-term sustainable future, and needed to be replaced. Without investigating and funding new renewable solutions, however, we were destined to continue to pollute. Gary was a shy and softly-spoken member of my church, and played guitar in the music group. Here I saw him in a new light and was proud to see his growing confidence and courage. Along the walk, we also heard from an Aboriginal elder, who said that digging coal was not in harmony with their spirituality, but that harvesting the sun certainly was. 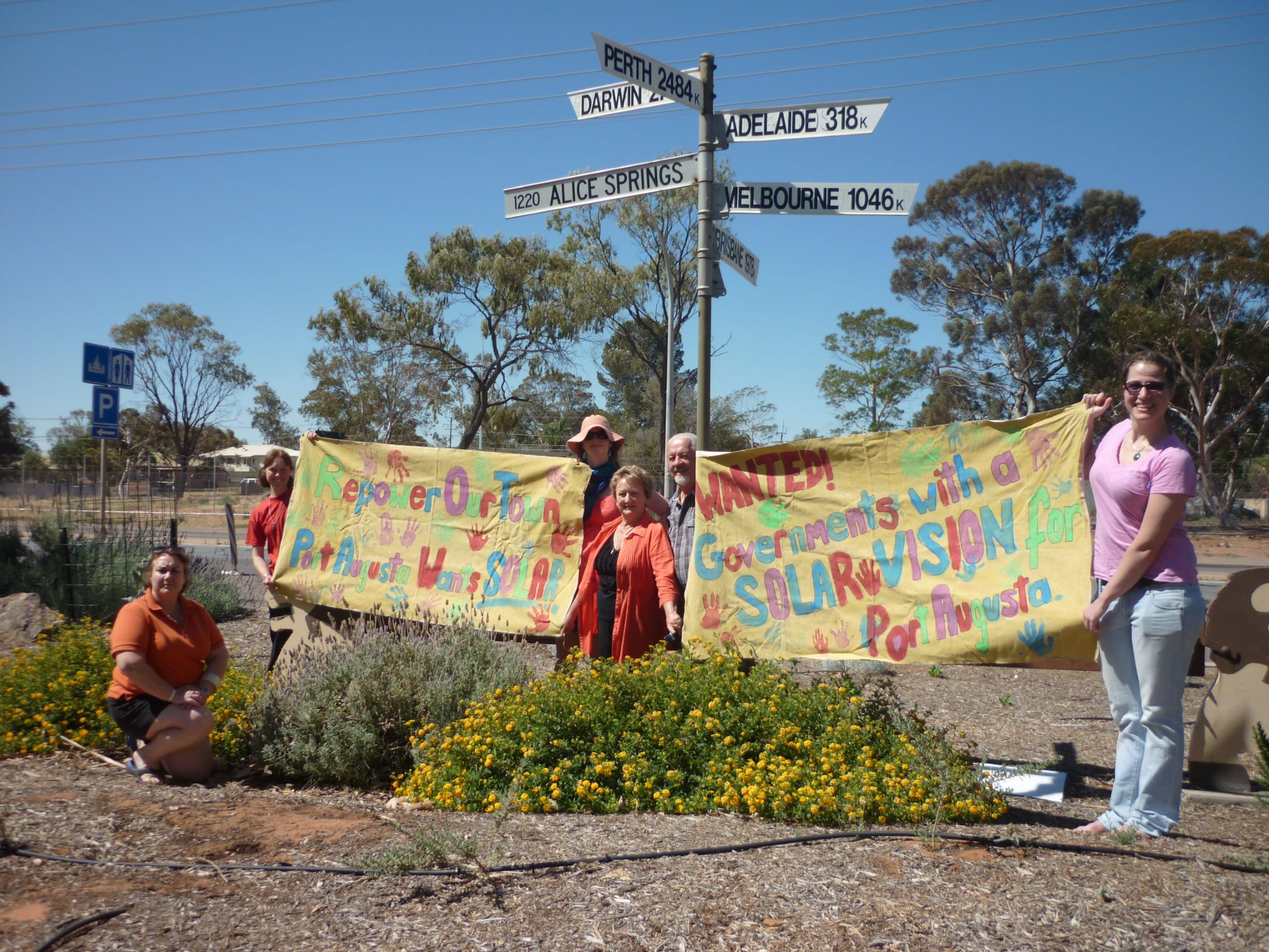 Over the next 5 years, the campaign grew in momentum. It took a lot of energy, but it was hopeful to see the local group working so well with the national organisations, especially the Australian Youth Climate Coalition (AYCC). Dan Spencer, from AYCC, said that he became involved because it promised to have the biggest impact on addressing climate change. While locals may have had various other motivations, they developed the support and solidarity to work together. He said, “For some it was about regional development, for some it was about the historic health impacts of living next to a coal-fired power station. What was the unifying factor was the uncertainty of how long the coal station would operate and the need to create a new industry with new jobs to replace it once it closed.” We even got our bishop to support the campaign and collected signatures for petitions outside our church. Our local priest, Fr Paul Crotty commented: “From a faith perspective, I think with so much sun and wind in our land, that it should be harnessed to provide energy.”

Despite the hard work and many successes of the campaign, it was not a simple or orderly transition to this new economy. In 2015, Alinta announced the closing of the coal stations, and they were demolished over the next few years. Gary lost his job and had to relocate for other work. I left at the end of 2016 with one power ‘stack’ toppled and the other one on its way. Joy Baluch had died unexpectedly in 2013 and would have been sad to see many were losing their jobs and moving away from the town.

Yet there were already new industries being created. In 2014, Sundrop Farms had built a 20-hectare greenhouse, supplying 10% of Coles truss tomatoes. Their facility included a solar thermal power station and desalinator, to produce the tomatoes with only sea water and sun. The dreamed-of large-scale solar thermal power station was promised at this time, having received federal funding and state power purchases. The new mayor, Sam Johnson, spoke with hope about the resilience of the community and their diversified economy.

Since then, that particular solar thermal plant was not able to go ahead. Yet people are excited about the future for Port Augusta and surrounding region. It has been dubbed the 'Renewables capital of Australia' and there are many more renewable projects on the go. These include wind farms, photo-voltaic solar and pumped hydro-electric power. In the nearby city of Whyalla, the Adani group has been building a large solar farm with batteries to supply their major industry of steel manufacture.

Everyone agrees that a mixture of industries will make this community thriving and viable. The renewable technologies are a key part of that and make Port Augusta a world leader. Foreign companies have chosen to invest there because of the accessible infrastructure and strong community support. As these industries are still growing, they do need the government investment comparable to the beginning of the coal industry, but much has been achieved already by industrial players alone. This is the future, and it is looking bright for my old stomping ground.

I tell this story when people wonder how rural towns will be affected by the transition from fossil fuels. I saw the change, the pain, the hope and courage. Their rural qualities of resilience, hard work and strong community are things that city-dwellers can learn from. This is what will help us adapt and thrive as custodians of this beautiful common home entrusted to us by God.